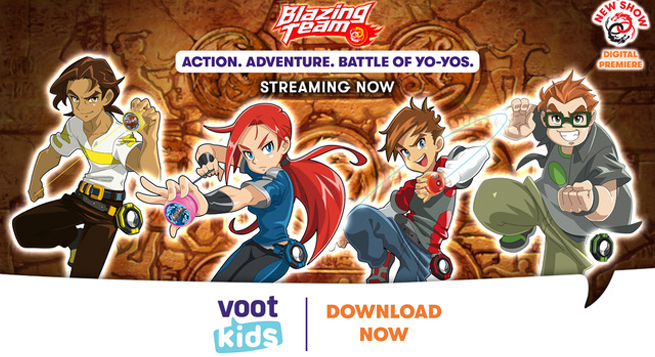 India’s largest and most loved content platform for kids, Voot Kids, has pulled out all stops to enthral its young viewers with an unlimited dose of entertainment with a new high octane superhero series ‘Blazing Teams: Masters of Yo Kwon Do to India’.

The skewed animation is specially offered for a pre-teen audience, well-received internationally, is produced by China-based Alpha Group and animation studio Guangdong Alpha Animation and Culture.

‘Blazing Teams’ in the reimagined avatar transports the subscribers into the mystical world of Yo Kwon Do, a practice that brings the skills of the yo-yo together with martial arts.

The torchbearers of these riveting adventures are a cool quartet of Parker Bates, Maddie Stone, Scott Hardy, Wilson Tisch who form the Blazing Team, mentored by the wise master Lao- Shi.

These ordinary teens explore the extra-ordinary capabilities as the mystery of doomsday looms large over their hometown of Union City, the streaming platform said.

Voot Kids is the digital home to some of the world’s most loved characters with curated content as its biggest strength spanning across video, audio stories, eBooks, and interactive quizzes, whilst maintaining its allegiance to meaningful screen time.

In ‘Blazing Team: Masters of Yo Kwon Do too’, while the miscellany of martial arts and yo yo yo tricks play on under the overarching trait of “good vs evil” holds across its initial 20 episodes in Hindi and English, it’s the subliminal undertones of teamwork and finding your superpower that set the tone for riveting story arcs.

The 20 new episodes and an exciting ‘watch and win’ contest are all set to go live on Voot Kids from January 26 onwards, as an adjunct to its adding to its wide library of high popular action-adventure based toons that make the preferred choice for parents and kids.

Viacom 18 has the licence for Blazing Team’s consumer products and the toys are already in the market, and this content partnership was to have network leverage.

Speaking about the partnership, Ashutosh Parekh, Head of Content, Voot Kids said, “At Voot Kids, we have been successfully enthralling our young viewers with an unlimited dose of wholesome entertainment. With the addition of ‘Blazing Team: Masters of Yo Kwon Do’, we continue to focus on building a robust global content roster and further strengthen our position as India’s one-stop destination for favourite characters and entertainment for children, who are inherent digital natives.”

“In fact, this has crossed the age barrier to have a far wider appeal, given this action-adventure fuelled animated series in its reimagine avatar captivates young viewers and instil a sense of power and responsibility in them. With a strong pulse on our consumers content insights and satiating ever increasing demand for kids’ content, bringing fresh stories and the best of characters on our platform is a natural progression to stay as strong category leaders, that both parents and children lean on,” Ashutosh added.

“We are thrilled to be partnering with Voot Kids/Viacom 18 on “Blazing Teams”, such an amazing brand which has as already an important track record internationally and will enjoy a wide marketing support in the Indian market to secure a successful launch plan,” says Antoine Erligmann, VP International, Media, TV/VOD & CP at Alpha Group.