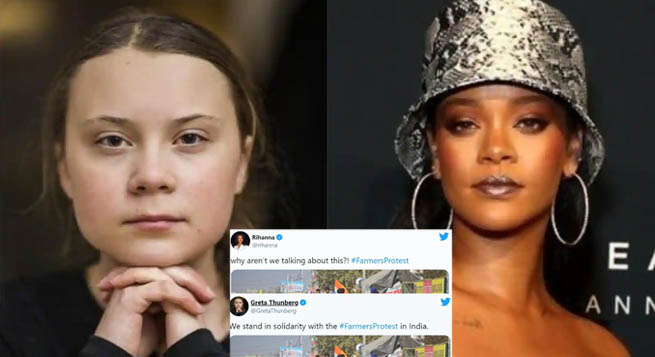 A war of words broke out after Jamaican-origin-US-based singer Rihanna and green activist Greta Thunberg tweeted about farmers protests that has been rocking Delhi and its neighboring areas for over a month now.

Indian government accused “foreign individuals” and celebrities of “sensationalism” without understanding the ground realities. According to BBC, the widely shared tweets went viral, garnering thousands of responses — for and against the stand taken by the two ladies.

In a statement on February 3 the Indian External Affairs Ministry said parliament had passed “reformist legislation relating to the agricultural sector” after a full debate and discussion.

“The temptation of sensationalist social media hashtags and comments, especially when resorted to by celebrities and others, is neither accurate nor responsible,” the government statement added.

Rihanna’s tweet on Tuesday linked to a news story about the internet blockade at the protest sites on various borders of New Delhi with neighbouring States.

Soon after the issue went viral Indian celebrities like cricketer Sachin Tendulkar and actors Akshay Kumar and Ajay Devgn joined the issue tweeting that such irreponsble tweets were avoidable and Indians know better about their country.

“India’s sovereignty cannot be compromised. External forces can be spectators but not participants. Indians know India and should decide for India. Let’s remain united as a nation. #IndiaTogether #IndiaAgainstPropaganda,” Tendulkar tweeted on Wednesday.

Bollywood actress Kangana Ranaut, a great supporter of Prime Minister Narendra Modi, quoting the Rihanna tweet, countered: “No one is talking about it because they are not farmers, they are terrorists who are trying to divide India. “.