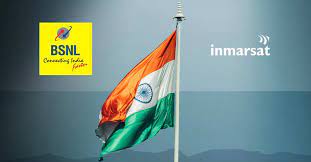 Under BSNL’s inflight and maritime connectivity (IFMC) licence from India’s  Department of Telecommunications, GX will be available to Indian customers across government, aviation and maritime.

The announcement means that India’s airlines will be able to deploy GX for in-flight connectivity within India and throughout the world, while India’s commercial maritime companies will be able to enhance significantly the digitalisation of their vessels for more effective ship operations and crew welfare services, a press release issued by Inmarsat said.

BSNL’s license will also see the award-winning GX service offered to government and other users. There will be a phased introduction of services for customers and partners.

Rajeev Suri, Inmarsat CEO, in a statement said: “Today is a significant day for Inmarsat and our valued, long-term partnership with India, which was a signatory to the founding treaty establishing Inmarsat in 1979. Inmarsat is delighted to make the world’s only global high-speed mobile broadband Ka-band network available to the Government and businesses in India through our partner BSNL.

“We are committed to India and the company has been a trusted partner for the Indian government for four decades. Today’s announcement, which we share proudly with our friends at BSNL, will help to underpin the further economic growth that we all wish to see in India.”

GX, operating in the Ka-band, is the first and only high-speed broadband network designed for mobility and government customers to seamlessly span the world.

The media statement also stated  GX is continually evolving to offer even more capacity, capabilities and operational agility for Inmarsat customers now and well into the future.

The company is launching a further seven GX satellites, including its next generation GX satellites, over the coming three years, each of which will add more capacity into a single region than the first four satellites combined. The GX gateway for India is located in Ghaziabad, Uttar Pradesh.

Chairman and Managing Director of BSNL, P.K. Purwar, said: “BSNL and Inmarsat are delighted to share this key milestone with our partners and customers in India. Global Xpress is recognised as the world’s best high-speed satellite communications service for government and mobility business customers and we are very pleased to make these capabilities available to users in India.

“All of us at BSNL appreciate the commitment to excellence shown by the Indian Government as we have worked on approvals to deliver this service to the country.”

According to Ajay Singh, CMD of SpiceJet Ltd, said: “We are delighted that Global Xpress, the world-leading passenger inflight connectivity service, is now coming to India. We are looking forward to offering this ground-breaking connectivity service to our passengers later this year, when we introduce our new Boeing 737 MAX aircraft. It will enable our customers to remain connected in the air as they do on the ground.”

Inmarsat recently unveiled plans for ORCHESTRA, the communications network of the future, which will bring the company’s existing geosynchronous (GEO) satellite networks (GX and Inmarsat ELERA operating in the L-band) together with low earth orbit satellites (LEO) and terrestrial 5G to form an integrated, high-performance solution, unmatched by any existing or planned competitor offering.