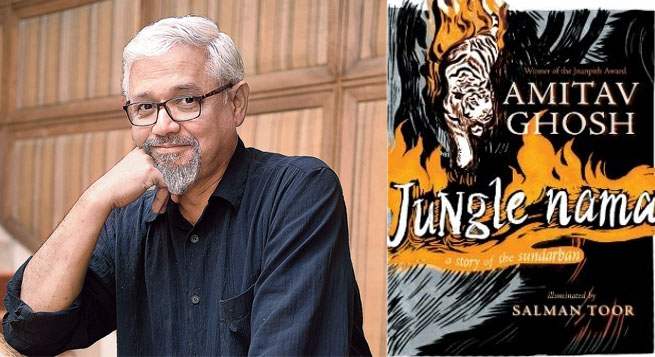 Amitav Ghosh’s ‘Jungle Nama’, the verse adaptation of an episode from the Legend of Bon Bibi, a tale popular in the villages of the Sundarbans, has now been released as an audiobook with music and voice of US-based Ali Sethi.

HarperCollins India said this is an exclusive collaboration among three of the most influential figures from the world of arts, PTI reported from New Delhi.

“With verses from Amitav Ghosh, illustrations from Salman Toor, and now with music and voice of Ali Sethi,  ‘Jungle Nama’ evokes the mystery and majesty of the Sundarbans in a way that is unique and unforgettable,” a statement from the publishers said.

According to Ghosh, he wanted to have a musical version of  ‘Jungle Nama’  right from the start.

“I consider myself fortunate that it came about through a collaboration with a musician of the caliber of Ali Sethi. Not only is Ali rigorously trained in Hindustani classical music, but he is also thoroughly versed in many genres of Western music such as Broadway musicals, rap, and so on,” he said.

“On top of all that, he has a really beautiful voice. Ali’s reading of  ‘Jungle Nama’  is mesmerising, and I am sure that the music he has composed and performed for the audiobook will enchant listeners for a long time to come,” Ghosh added.

Lahore-born Sethi said Ghosh’s retelling of this “magical folktale is full of the wisdom and wonder one has come to expect of him – an ecological parable that playfully imparts important lessons about greed, wanderlust, and the power of restraint”.

The music, he said, “draws constantly on our syncretic raga traditions”.

Udayan Mitra, executive publisher at HarperCollins India, said this is much more than the usual audiobook, it is an artistic collaboration of the very highest order between Ghosh and Sethi.

‘Jungle Nama’ also lies at the heart of Ghosh’s novel  ‘The Hungry Tide’.

It is the story of the avaricious rich merchant Dhona, the poor lad Dukhey, and his mother; it is also the story of Dokkhin Rai, a mighty spirit who appears to humans as a tiger, of Bon Bibi, the benign goddess of the forest, and her warrior brother, Shah Jongoli.

The original print version of this legend, dating back to the 19th century, is composed in a Bengali verse meter known as ‘dwipodi poyar’.

‘Jungle Nama’ is a free adaptation of the legend, told entirely in a poyar-like meter of 24 syllable couplets that replicate the cadence of the original.