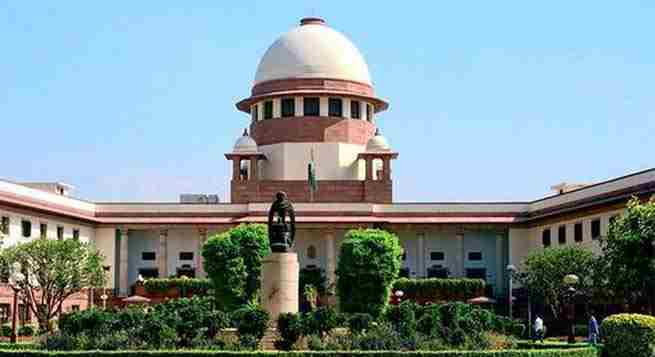 The Supreme Court has set aside an interim order passed by the Madras High Court in a writ petition filed by some broadcasters and FM radio stations, challenging Rule 29(4) of Copyright Rules, 2013, legal website Livelaw.in reported on Wednesday.

“Craftmanship on the judicial side cannot transgress into the legislative domain by re-writing the words of a statute. For then, the judicial craft enters the forbidden domain of a legislative draft,” the bench of Justice DY Chandrachud and BV Nagarathna observed in case involving Saregama India Limited vs. Next Radio Limited and others, the website reported.

Section 31D deals with statutory license for broadcasting of literary and musical works and sound recording.

The validity of Rule 29(4) of the Copyright Rules was challenged by the petitioners on the ground that it (i) violates Article 19(1)(a) of the Constitution and (ii) is ultra vires Section 31D of the Act in the Madras High Court.  The high court, in its interim order, had observed the duty, which is cast on broadcasters in the notice to broadcast under Rule 29(1), is “apparently onerous”, Live Law reported.

In the challenge of the high court order, it was pleaded in the Supreme Court that the interim order amounted to re-writing Rule 29(4) of the Rules framed in pursuance of the provisions of Section 31D and Section 78(2) (cD) of the Copyright Act 1957.

The apex court noted that the high court has substituted the provisions of Rule 29(4) with a regime of its own, which is made applicable to the broadcasters and the petitioners before it.

“An exercise of judicial redrafting of legislation or delegated legislation cannot be carried out,” Live Law quoted the SC as observing, while clarifying the court has not expressed any opinion on the merits of the rival submissions regarding validity of Rule 29 (4).

Incidentally, Commerce Ministry’s DPIIT (formerly DIPP) just concluded, as part of a consultation, getting feedback from the stakeholders on Section 31D of the Copyrights Rules, which, industry sources told Indianbroadcastingworld.com, has attracted diverse viewpoints with a sizeable percentage of the submissions opposing the amendments proposed by the government.