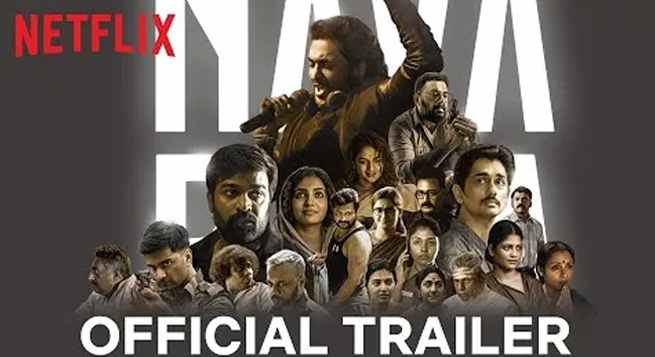 The highly-anticipated trailer of Netflix’s Tamil anthology drama Navarasa has been released its trailer. The trailer is filled with emotions as the title itself, which doesn’t reveal much in terms of plot.

The trailer opens with love, where Suriya delivers a classic Gautham Menon dialogue about a girl that he has met. It feels as if it is an extension of Suriya’s character from Vaaranam Aayira, which slip into a whirlwind of emotions such as fear, vengeance, hatred, confusion, deceit, longing, anger, regret, and more.

The anthology seeks to pack not just nine different emotions but also all kinds of popular genres. We also see a glimpse of what looks like a sci-fi thriller starred Arvind Swamy and Prasanna. And it also tackles several socially and historically relevant issues, including the Sri Lankan Tamil conflict.

For unversed, Navarasa is a charity project, which was conceived by directors Mani Ratnam and Jayendra Panchapakesan. The veteran directors of the Tamil film industry have put together a team of actors and technicians who agreed to do the project for free. The earnings from the film will be used to help those who have been impacted during the Covid-19 induced lockdown.

Navarasa will see the collaboration between some of the most prominent directors, who have made nine short films based on nine ‘rasas’ (emotions). Bejoy Nambiar, Gautham Vasudev Menon, Karthik Subbaraj, Karthick Naren, K.V. Anand, Ponram, Rathindram Prasad, and Halitha Shameem have directed the short films in this anthology. Actor, Arvind Swamy is also making his directorial debut with a short film in the anthology.

Navarasa will start streaming on Netflix on August 6.