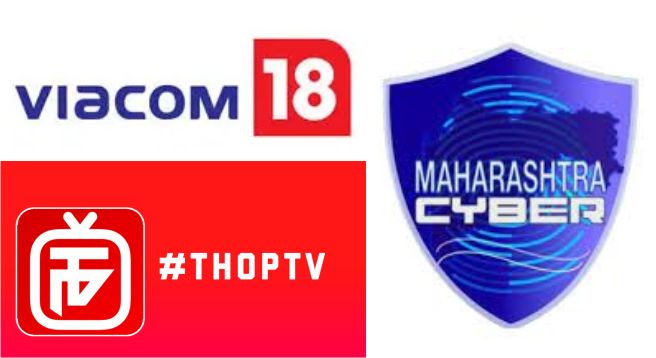 On a complaint filed by a leading Indian broadcaster, Viacom18, the cyber police in the western State of Maharashtra took action against Thop TV for online piracy of the complainant’s content.

Viacom18 has been at the forefront in addressing and curbing piracy of content. In a recent content violation issue, the network had filed an official complaint with Maharashtra Cyber against Thop TV, alleging that the ‘rogue, standalone’ application had been relaying and transmitting the network’s content without authorization at a discounted price to common public, thus causing a substantial revenue loss to the network, a joint statement by Maharashtra Cyber and Viacom18 stated.

The research and analysis team of Maharashtra Cyber, the cyber crime unit of Maharashtra Police, investigated the matter and arrested the accused, a 28-year-old Satish Venkateshwarlu, a Hyderabad-based IT engineer.

The charges against Satish were leveled under Sections 43, 66 and 66B of the Information Technology Act, 2000, Section 63 of Copyright Act, and Section 420 and 34 of the Indian Penal Code (IPC).

The accused was produced before a lower court and has been remanded to a week’s police custody for further investigations. The accused was found to have created a standalone pirated application, through which he stole content using its inbuilt API.

Speaking on the investigation, Superintendent of Police Sanjay Shintre, said, “Viacom18 Media Private Limited lodged a complaint with the Maharashtra Cyber against a mobile application, Thop TV, which was relaying and transmitting their copyrighted content such as movies, TV shows and VOD content at a discounted rate, thus causing substantial revenue loss to the company.”

The police official added that investigations highlighted that the accused, an educated infotech engineer from Hyderabad, had developed a mobile application named ‘Thop TV’ and pirated Viacom18’s content through Telegram, a social media intermediary. The app had hundreds of thousands of viewers, including 5,000 paid subscribers that “generating massive revenue for the app.”

Speaking on this development, a Viacom18 spokesperson said, “Piracy is a matter of grave concern for the media industry and one that needs to be addressed constantly. It is important to acknowledge that digital piracy is a serious offence, which causes huge losses to the digital economy. Viacom18 will continue to fight this menace and secure its content through all means available under law. We are grateful to the Office of the Inspector General of Police Maharashtra Cyber for their constant vigilance and timely support towards curbing piracy and copyright violation.”