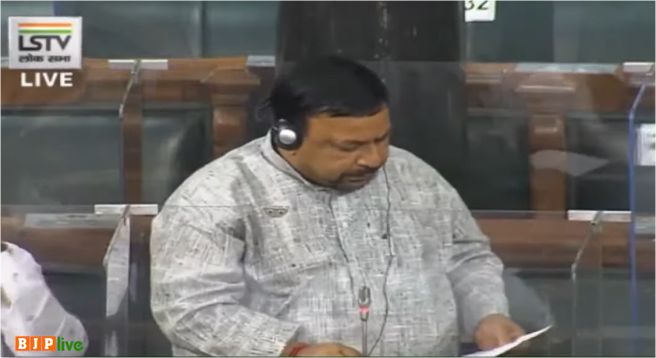 Even as India’s Opposition political parties disrupted proceedings in the parliament over the last few days demanding discussion on certain issues, a BJP Member of Parliament found time to call for a ban on online content, which, he described, as against Indian culture and ethos.

On Tuesday, Lok Sabha (Lower House of parliament) Member of Parliament from Farrukhabad constituency in India’s northern State of Uttar Pradesh, Mukesh Rajput, raised the issue of indecent content on streaming platforms (https://youtu.be/Ku5DYZLZ5Kg) and, at times, was cautioned to read from the text that had been “approved”.

Drawing the attention of Minister of Information and Broadcasting, Rajput called for a ban on the “unrestrained, adultery-promoting” content on OTT platforms as they had a negative impact on the young people of the country.

More so, as such content could distract young people from studies, Rajput asserted, amidst calls that he should stick to the approved script.

Instead of showing shows that inculcate Indian ethics, highlighting Indian culture, the OTT platforms were airing content that encouraged consumerism, indecency and adultery, amongst other things, as their popularity has risen owing to closures of cinema halls due to the pandemic.

Rajput said that the most of these web series were not fit enough to be seen with the whole family sitting together.

The government notified the Information Technology (Intermediary Guidelines and Digital Media Ethics Code) Rules, 2021 on February 25, 2021 and had given companies three months time to comply with the regulations. While MIB administered the code of ethics for curated content, its counterpart Ministry of Electronics and Information Technology looked after the intermediaries and their carriage segments.

Digital Norms Protect Citizens’ Constitutional Rights: Meanwhile, on Wednesday, the Ministry of Electronics and Information Technology (Meity) on Wednesday in Lok Sabha stated that the new digital regulations were not implemented to censor criticism of the government on social media and stressed that constitutional rights of citizens were fully protected.

Meity Minister was asked whether the new norms were implemented to allegedly avoid censure of government’s works and policies on social media and whether the government has taken note of the fact that the rules could likely impede social media platforms from informing citizens in a free, fair and unbiased manner.

“Government has notified the Information Technology (Intermediary Guidelines and Digital Media Ethics Code) Rules, 2021 on 25th February, 2021 superseding the erstwhile Information Technology (Intermediaries Guidelines) Rules, 2011. These Rules are as a result of public consultations comments and suggestions received during stakeholders’ meetings and are used in bringing accountability of these intermediaries to their users. The Rules also prescribe additional due diligence to be followed by significant social media intermediaries.