Priyanka, her Netflix production to feature at British awards
SUBSCRIBE 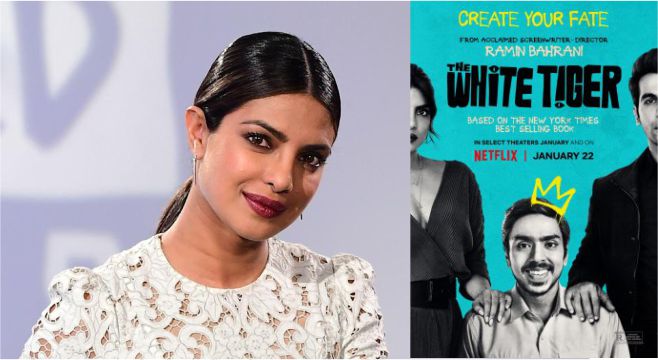 British teen drama “Rocks” and American gig-economy Western “Nomadland” lead the race for the British Academy Film Awards, which are being handed out Sunday during a pandemic-curbed ceremony.

Hugh Grant, Tom Hiddleston and Priyanka Chopra Jonas are among the presenters who will announce the winners from the stage of London’s Royal Albert Hall, but award recipients will accept their honors remotely, and there will be no black-tie audience to cheer them on, Associated Press reported from London.

Prince William, who had been due to attend and make a speech in his role as president of Britain’s film academy, also will be absent following the death of his grandfather, Prince Philip, on Friday.

“Nomadland,” Chloe Zhao’s drama about a middle-aged woman who travels the American West while living out of her van, and “Rocks”, Sarah Gavron’s coming-of-age tale about a Black teenage girl in London, are the leading contenders, with seven nominations apiece.

The British film academy shook up its membership and its voting rules last year in an attempt to address a glaring lack of diversity in the nominations. In 2020, no women were nominated as best director for the seventh year running, and all 20 nominees in the lead and supporting performer categories were white.

This year’s slate of acting nominees is strikingly more diverse, and four of the six filmmakers nominated for best director are women: Zhao, Gavron, Shannon Murphy (“Babyteeth”) and Jasmila Zbanic (“Quo Vadis, Aida?”). Also nominated are Lee Isaac Chung for the family drama “Minari”and Thomas Vinterberg for the Danish dark comedy “Another Round”.

The nominees for most outstanding British film — a category expanded to 10 — are: “The Dig,” “The Father,” “Calm With Horses,” “His House,” “Limbo,” “The Mauritanian,” “Mogul Mowgli,” “Promising Young Woman,” “Rocks” and “Saint Maud.”

The British awards, known as BAFTAs, are usually held a week or two before the Oscars and have become an important awards-season staging post.

According to the AP report, this year, both the British and Hollywood awards were postponed from their usual February berths because of the coronavirus pandemic.

BAFTAs in craft and backstage categories were handed out Saturday. The ceremony opened with a tribute to Prince Philip, who was the first president of Britain’s film academy in 1959 and who died Friday at age 99.

Actor, writer and director Noel Clarke received the outstanding British contribution to cinema award, dedicating it to “my young black boys and girls out there that never believed it could happen to them.”