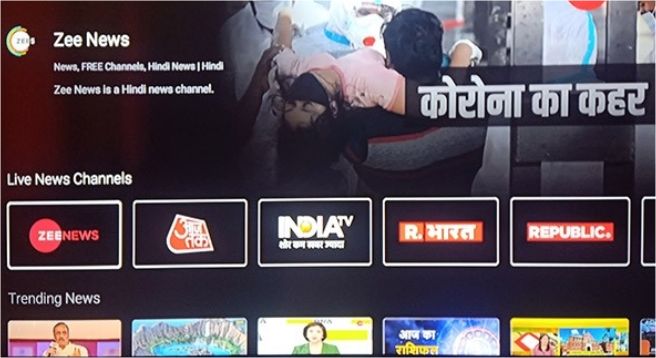 Amidst confusion prevailing over India’s newly-implemented digital regulations as court cases are filed and companies seek exemptions, some of the OTT players are exploring if it makes more sense to remove news channels streaming over their platforms.

Though not officially confirmed, but a mainstream OTT app, which had no history of the parent company ever operating or owning any TV news channels in India, has already removed third party news channels that streamed earlier on its platform.

An Indian TV industry executive having diversified experience in linear TV business said that the predicament of the OTT platforms is due to the fact a section of news channels had sought exemption from the purview of the country’s digital norms announced for OTT and SM platforms, and pure play digital news publishers.

Last month, the News Broadcasters’ Association (NBA), one of the industry trade bodies representing broadcast news channels in India, had petitioned the Indian government to exempt its member-channels’ digital extensions from the purview of the new infotech rules.

While appreciating the “need for regulations”, NBA had stressed “traditional news media need not be subjected to and/or covered under the scope of the IT Rules 2021, since it is already sufficiently regulated by various Statutes, laws, guidelines, codes, regulations (like the Cable TV Networks Regulation Act and Uplink/Downlink guidelines, for example)…”

NBA is not the only organization seeking exemptions; the Digital News Publishers Association, comprising legacy print medium companies with digital extensions, too had sought similar relief from the government. Both the bodies are yet to get feedback from the Ministry of Information and Broadcasting, which implements the content regulations under the new rules.

The Mint newspaper reported yesterday that news broadcasters were exploring legal options and trying to build consensus. “Things are all over the place right now and nobody wants to jump the gun unless other people do it. Plus, there are some who find certain aspects (of the rules) problematic, but you can’t comply with some directives and challenge others,” Mint quoted an unnamed executive of a TV news channel.

TV news channels are not sure if they would get immediate relief from court in case they decide to opt for legal relief, the Mint report stated, adding a recent petition by digital news publishers The Wire and The Quint challenging the IT Rules has been adjourned to  August 4 with the bench refusing to grant interim protection that was sought. These digital-first organizations are part of a body called DIGIPUB News India Foundation.