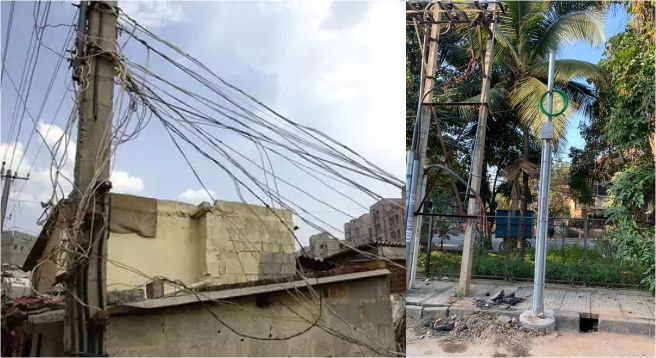 After the cable TV operators in Bengaluru in India’s southern state of Karnataka protested removal of optical fibre cable in the city, terming it “illegal” and a “disgrace”, apparently the Chief Minister’s Office directed the local civic administration to halt the operations.

“We wish to bring to your notice that a memorandum has been given by our Association today (March 17) to the Honorable Chief Minister Mr. B.S. Yediyurappa with regard to BBMP (Bruhat Bengaluru Mahanagara Palike, the city civic administration)

drive on dangling OFC in the city. (The) CM’s office has instructed the BBMP Commissioner to refrain from snapping /cutting OFC cables of TV service providers,” the Karnataka State Cable TV Operators Association (KSCOA) yesterday declared in a Facebook post.

The office-bearers of the KSCOA met the State chief minister to apprise him of BBMP drive to clear the city of OFC, which can be seen hanging on poles, building, etc. without prior notice and termed the operation a “disgrace” as it resulted in major financial loss to the cable operators of Bengaluru city.

While pointing  out that cable TV operators were legal and licensed entities under a federal law, the Cable TV Networks (regulation) Act that’s administered by Ministry of Information and Broadcasting, the KSCOA memorandum said, “Therefore, we are eligible for right of way to establish our infrastructure for providing our services as per (regulator) TRAI regulations.”

However, the KSCOA also admitted that city’s skylines too should be clear and highlighted that it “has been in agreement” with local authorities that “illegal cable drawn overhead” by providers of Internet and broadband should be “promptly dealt with”.

The KSCOA team was led by S. Patrick.