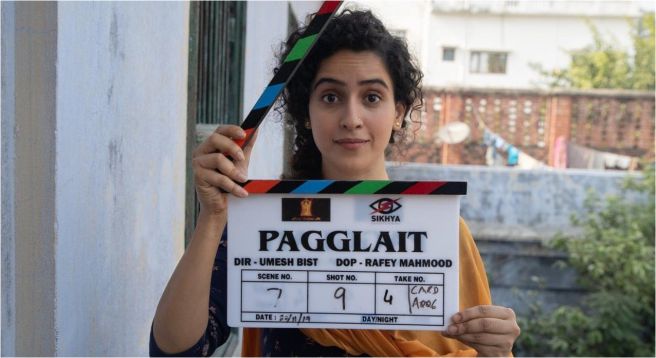 “Mamma, I have a feeling my life is going to change”. That’s what Sanya Malhotra, who says she is self critical to the point of being negative, told her mother ahead of the release of her critically acclaimed film ‘Pagglait’.

And change it did. The film, which begins with death but is the life-affirming story of a woman coming into her own, felt special from day one, says Malhotra who has been receiving high praise for her performance.

It was also for the first time that Malhotra said she decided not to be too hard on herself and just enjoy the journey, PTI reported from New Delhi.

“I don’t say this before every film. To be honest. I’m quite critical, and a perfectionist with all the negative connotations attached to the term. This was the first time I told my mother as it all felt special from day one of the shoot,” she said.

The 29-year-old actor described her character Sandhya as an emotionally mature person who decides to take the reins of her life in her own hands while grappling with conflicting feelings after the death of her husband just five months after their arranged marriage.

“This character and the script are very close to my heart,” Malhotra told PTI in a Zoom interview.

With all the love coming her way for her role in the Umesh Bisht-directed film, Malhotra’s intuition about “Pagglait” being special and changing her life seems to have come true.

She is a trained dancer from Delhi who moved to Mumbai in search of a career and began her innings in Bollywood with Aamir Khan-starrer “Dangal” in 2016.

After that came a variety of roles in films such as Ritesh Batra’s “Photograph”, Vishal Bhardwaj’s“Pataakha”, Amit Sharma’s “Badhaai Ho”, Anu Menon’s “Shakuntala Devi”and Anurag Basu’s “Ludo”. And “Pagglait”, which has been consistently in Netflix’s top 10 most-watched list in India as well as other countries since it released on March 26, has been the proverbial cherry on the cake.

The actor believes “divine will” was with them in the film.

Recalling her words to her mother that her life would change, she said, “And it did. I came very close to Sandhya, living her life completely”.

“We finished the shoot in January last year and we went into a lockdown in March. The whole of 2020 was about introspection. I realised how much I have learned from Sandhya, how she has inspired me,” Malhotra said, adding she never learned acting.

“After‘Dangal’ my aim was to do every kind of film and character so that I can learn a lot. I’m still learning. It has been a beautiful journey so far. I never imagined my career panning out so beautifully,” she added.

She said Batra’s call for “Photograph”came just a day before the release of “Dangal”. In “Photograph”, the actor was praised for her internalised performance of a reticent and shy girl Melonie who bonds with Nawazuddin Siddiqui’s tourist photographer character.

“It was a very big thing for me as an actor because I never thought that I won’t be lining up to give auditions. I still give auditions. But I was so happy to know that he had a script for me. I was like ‘Oh my god, now I’m going to read scripts and get a narration’,” she explained.

The actor said Melonie was a difficult character for her to get into and equally difficult to let go of: “It took a long time for me as Sanya to pull Melonie out of my system. That was special for the film but sometimes, she used to trouble me because she is so reticent and shy… I am reticent and shy but not like Melonie.”

Malhotra said she picked up the habit of sketching the details of her characters from actor Geetanjali Kulkarni, her co-star in “Photograph”.

Malhotra has picked up other dos and don’ts along the way.

“I never go on set without meditating or breathing exercises. They help me anchor myself, I learned that in a workshop with Atul Mongia (acting coach) sir,” she said

“I am still working on detaching myself from the characters I’m playing because I’m an emotionally sensitive person and I tend to get attached to characters on an emotional level. I’m still trying that because there are days when I get into the headspace and it is very tough to come back to my core,” she added.

Malhotra said she reads everything about her movies as there is a learning in everything but “Pagglait” was the first time that she did not take things personally or was too critical about herself.

As far as the future and her dreams are concerned, Malhotra hopes she continues to play varied roles and grow as an actor.