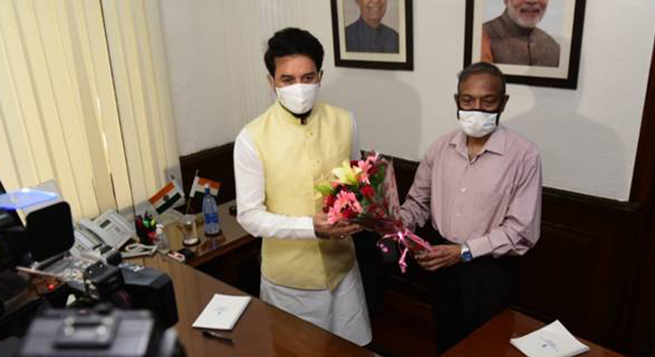 With lots on his plate — ranging from implemented amendments to Cable TV Rules to content moderation for OTT platforms to an under-discussion new broadcast policy — the new Minister of Information and Broadcasting, Anurag Thakur, will have to hit the ground running.

Thakur, who assumed his charge at MIB Thursday, didn’t touch upon any issues related to the media and entertainment sector during the customary interaction with media on his first day, saying there would come later a time when many issues would be discussed in detail.

However, he did tell the media  that Prime Minister Narendra Modi has made “strenuous efforts to take the nation forward in the last seven years” and, as Minister of I&B, it will be his responsibility to take that mission forward.

Thakur added that he would make all “efforts to deliver on the responsibilities” placed on him by the Prime Minister and looked forward to the cooperation of media in his efforts.

The Minister was welcomed in his chamber by Amit Khare, MIB Secretary. In an interaction with senior officials his Ministry, allied media units and pubcaster Prasar Bharati, Thakur said his endeavor will be to work with all the media heads as a team.

A four-time elected Member of the Indian Parliament (Lok Sabha/Lower House) from Hamirpur, Himachal Pradesh, Thakur has earlier held the charge of Minister of State for Finance and Corporate Affairs from May 2019 till July 2021.

He has also served as Chairman of the Parliamentary Standing Committee on IT, which also oversees media matters, in the past.