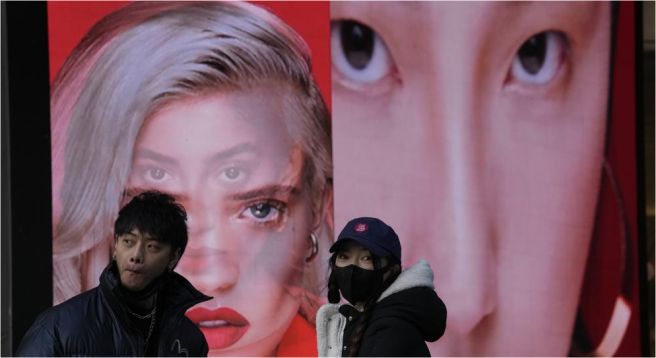 Advertisements featuring some Chinese models have sparked feuding in China over whether their appearance and makeup are perpetuating harmful stereotypes of Asians.

German automaker Mercedes-Benz and a Chinese food company are the latest to get caught up in the fray, AP reported from Beijing.

Mercedes Benz also was attacked by some Chinese online who accused it of using a model with “slanted eyes” in its advertisements on Weibo. The company did not immediately respond to requests for comment.

The “slanted eyes” stereotype emerged in the West in the 19th century and is considered offensive and derogatory to Asians.

The latest backlash over advertisements followed one over luxury brand Dior, which apologized and withdrew a photo at an art exhibition showing an Asian model with freckles and very dark makeup clutching a Dior handbag. In response to criticism in China, the company said that it “respects the feelings of the Chinese people”.

Three Squirrels said in a post Saturday on its official Weibo account that it did not intend to portray a Chinese person in a bad light. The advertisement was shot in 2019, the company said in a statement.

The model is Chinese and the makeup style was designed to suit her natural features, it said.

“In response to the feedback from netizens that the model’s makeup does not conform to publicly-accepted aesthetics standards and caused discomfort, our company apologizes,” the statement read.

“The page has been replaced and arrangements have been made to check other company pages to ensure that this situation will not happen again,” it added.

Online, Chinese internet users have criticized the selection of models and makeup styles to deliberately portray the “slanted eyes” image.

One user with the handle MaoBuErXiong said that such slanted eyes imagery is derogatory and is deeply embedded in the fashion industry, with Asian models and their makeup styles often selected to fit a stereotype.

The model featured in the Three Squirrels advertisements has spoken out against the criticism.

“Just because my eyes are small, I’m not good enough to be a Chinese person? I don’t know what to say to these comments … I’m really helpless,” the model said in a Weibo post under the handle Cai Niangniang.

“As a professional model, what I need to do is be photographed accordingly to what the client wants, I don’t know how this became about me humiliating the Chinese people,” she said.