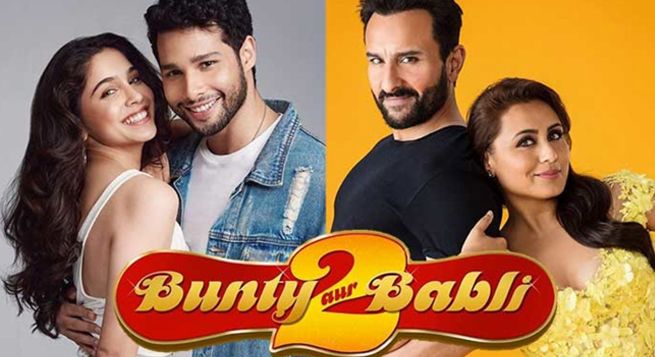 Starring Rani Mukerji, Saif Ali Khan, Siddhant Chaturvedi, and Sharvari in the lead roles, the film has been hogging the limelight ever since the first look poster was released.

The teaser opens with OG Bunty Aur Babli or Saif and Rani, who reunite on screen after 12 years, remembering their old times. After few seconds, the new pair of Bunty Aur Babli aka Siddhant and Sharvari come and say they are cooler and smarter than the OGs.

For the unversed, Rani Mukerji is reprising her role from the original film with Saif stepping into Abhishek Bachchan’s shoes.

The first film ended with the con artists giving up their illegal activities and helping the cop, Dashrath Singh, played by Amitabh Bachchan.

Earlier the duo has worked together in films like ‘Hum Tum’, ‘Tara Rum Pum’, and ‘Thoda Pyaar Thoda Magic’.

‘Bunty Aur Babli 2’ has been directed by Varun V. Sharma, who has worked as an assistant director in YRF’s biggest blockbusters, ‘Sultan’ and ‘Tiger Zinda Hai’.

The film is scheduled to release in theatres on November 19, 2021.