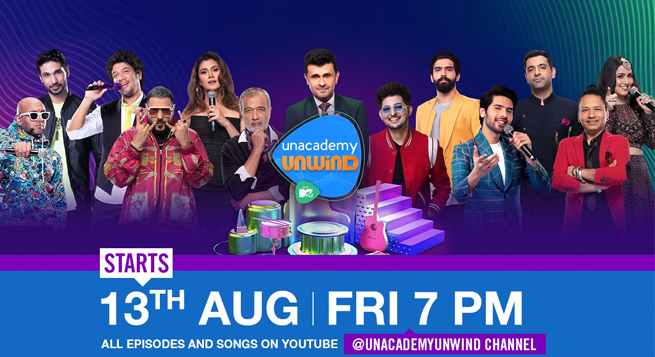 Unacademy, one of India’s largest learning platforms, Wednesday announced the launch of ‘Unacademy Unwind with MTV’, a first of its kind music show created in partnership with MTV.

As per the company’s press release, ‘Unacademy Unwind with MTV’ features legendary artists across 10 genres of music in a special program, spanning 10 episodes.

The show will consist of recreations and original compositions, designed to cater to the music taste of a young audience.
Speaking about the idea behind ‘Unacademy Unwind with MTV’, Sonal Mishra, Associate Vice President Marketing, at Unacademy said, “As a brand that touches millions of youth, it has always been our endeavor to explore newer avenues of connecting with them. The pandemic has been difficult for everyone and our learners have had to face the brunt of academic disruptions and uncertainties. Learners love music and use it as a mechanism to unwind. With Unacademy Unwind, we want to leverage the rejuvenating powers of music to infuse some soothing and magical moments into their lives.”

Speaking about the show, Anshul Ailawadi, Head, Youth Music and English Entertainment at Viacom18, said, “In these trying times, there is no better balm for the soul than music. Every single performance in this property is an MTV masterpiece by itself. We hope that each song will become a lifelong companion to young South Asians across the world as they navigate through life’s twists and turns.

According to Mahesh Shetty, Head of Sales, Viacom18, at MTV, the focus has been on creating properties that connect with the youth of India and provide an opportunity for brands to engage with a large and diverse audience base.

“We are extremely happy to partner with Unacademy to create this unique music property that will see India’s best musicians descend on one platform to create musical magic and what better for the youth of the country to unwind in these stressful times than soulful music,” he added.

Viewers can watch all episodes and songs on the YouTube Channel @UnacademyUnwind.

Unacademy Unwind would air every Friday at 7 pm.