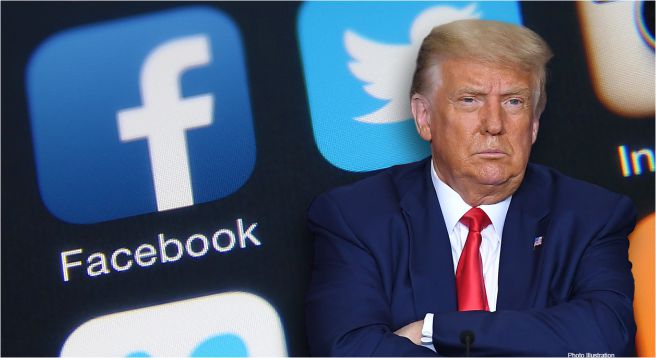 Former US President Donald Trump’s offloading from Facebook remains, but with a caveat from the oversight board that the platform needs to review the process leading up to the suspension within six months — clearly signaling how social media platforms could possibly handle global leaders in future for breaching company rules.

The social network’s quasi-independent oversight board voted to uphold the Trump ban from the platform after his account was suspended four months ago for inciting violence that led to the deadly January 6 Capitol riot. But, in a statement, it faulted Facebook for the way it made the decision and called its “indefinite” suspension of Trump unreasonable and unworkable, AP reported from San Francisco.

The Board said Facebook sought to avoid its responsibilities by applying “a vague, standardless penalty” and then referring the case to the board to resolve.

“Indefinite penalties of this sort do not pass the international smell test,” oversight board co-chair Michael McConnell said in a conference call with reporters, “We are not cops, reigning over the realm of social media.”

“We love you. You’re very special,” he said to the rioters in the first post. In the second, he called them “great patriots” and told them to “remember this day forever”. Those violated Facebook’s rules against praising or supporting people engaged in violence, the board said.

Helle Thorning-Schmidt, a former Danish Prime Minister who sits on the board, said in the call that Facebook shirked its responsibility to enforce its own rules. “Facebook should either permanently disable Trump’s account or impose a suspension for a specific period of time,” she said.

Thorning-Schmidt said Facebook can’t just invent “new unwritten rules” for special users when it suits the company, while everybody else has to follow their standards. “They did get it right, but they can’t have a penalty that’s indeterminate because that’s not in their own rules,” she said.

Reaction from Trump allies was swift.

“Break them up,” tweeted Rep. Jim Jordan, a close Trump ally and the top Republican on the House Judiciary Committee.

A Trump spokesman did not immediately respond to a request for comment.

The board gave Facebook six months to reexamine the “arbitrary penalty” it imposed on January 7 and decide on another penalty that reflects the “gravity of the violation and the prospect of future harm”.

It didn’t say exactly how Facebook should do that, but offered a number of recommendations. One advised against drawing a firm distinction between political leaders and other influential users because anyone with a big audience can potentially cause serious risks of harm.

Among the board’s recommendations is that considerations of a political leader’s “newsworthiness” shouldn’t take priority when the company must take urgent action to prevent harm. Facebook has said it didn’t consider newsworthiness in its Trump decision, but the board said there remains widespread confusion about Facebook’s handling of influential users.

The board also says Facebook should publicly explain the rules that it uses to sanction influential users, and emphasized the need for time-bound suspensions and clear rules on how they can be lifted. The board says the new penalty must be “clear, necessary and proportionate” and consistent with Facebook’s rules for severe violations.

The board says if Facebook decides to restore Trump’s accounts, the company must be able to promptly address further violations.

The board, which has 20 members and will eventually grow to 40, did not reveal how it voted. It said a minority of members emphasized that Facebook should require users who seek reinstatement after being suspended to “recognize their wrongdoing and commit to observing the rules in the future.”

The board said it considered a wide range of information, including 9,666 public comments from organizations and individuals. That included a statement from a Trump representative on his behalf.

Trump Launches Own Communications System: Mean while, a day before the oversight board gave its ruling, Trump on Tuesday launched a space on his website where he can post messages that can be shared by others to Twitter and Facebook, sites where he remains banned, Reuters reported.

Trump’s senior adviser, Jason Miller, said in a tweet that this collection of posts was not the social media platform that Trump has plans to launch. “We’ll have additional information coming on that front in the very near future,” he tweeted.

The site, which was first reported by Fox News, is dubbed “From the Desk of Donald J. Trump” and contains posts from Trump that can be shared and liked. A source, familiar with the matter, said Campaign Nucleus, the digital services company created by Trump’s former campaign manager Brad Parscale, built it.

Posts on the site repeated Trump’s false claim that he lost the 2020 election because of widespread voter fraud and denigrated fellow Republicans who have been critical of him like Senator Mitt Romney and Representative Liz Cheney.

A Twitter spokesman said sharing content from the website would be permitted as long as the material did not otherwise break Twitter’s rules, but that attempts to circumvent a suspension would not be permitted — for example, imitating a suspended account to try to replace it.

Facebook did not immediately respond to a request for comment on how it would treat posts shared from the new space built by Trump’s team.

Alphabet Inc, parent of Google’s YouTube, has said it will restore Trump’s channel when it decides the risk of violence has decreased.