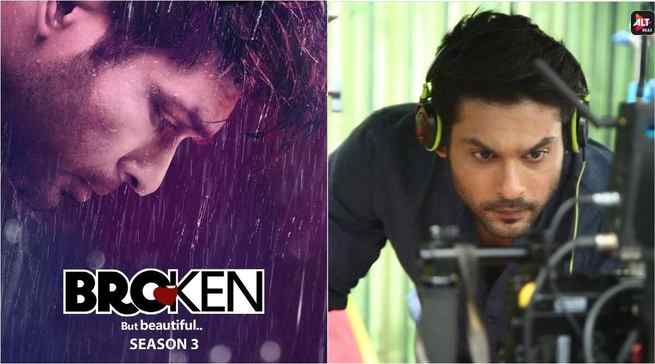 Yesterday, it came to light that the show will start streaming on ALTBalaji and Zee5 from May 29.

And today, another surprise was poured in by the makers who shared the first look of Bigg Boss 13 winner aka Sidharth Shukla who will be seen playing the role of Agastya in the show.

Rumi aka Sonia’s poster will also be revealed today at 6 PM. For those unversed, Broken But Beautiful 3 will make Sidharth Shukla’s debut in the digital world. Taking to Instagram, Sidharth shared his first look which featured just his face getting wet in the rain. Alongside the same, he wrote in the caption, “Meet Agastya – Fiery, passionate and willful! He can’t help but fall in love with someone who comes from a world he doesn’t approve of. Rumi’s poster out today at 6 pm; show streaming on 29th May on @Altbalaji.”

This comes a day after Harleen Sethi, who was the lead actress in the first two seasons announced the launch date.

The teaser was shared by the makers on the official Instagram handle with a caption reading, “Sameera has a message for all you #BrokenButBeautiful fans! #Agastya’s poster out tomorrow. #BrokenButBeautiful3 show streaming 29th May on #ALTBalaji We wish the announcement of our show could have come at a better time; still, we hope that #BrokenButBeautiful3 can serve as your break during these testing times.” Even the show’s producer Ekta Kapoor shared the same and wrote, “My heart Broke n then came my happy pill! This one is for d happy pill! Coming soon.”