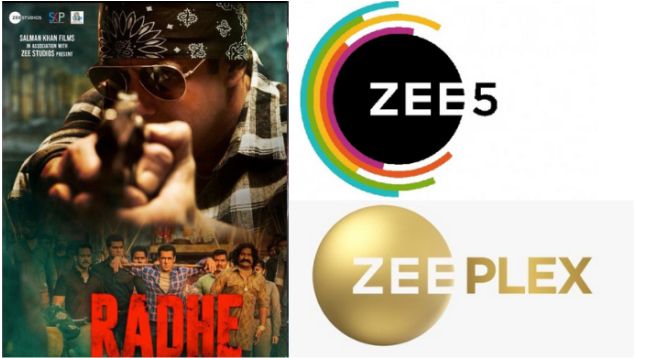 Existing subscribers form a large chunk of views on Zee5

Salman starrer Radhe released yesterday on Zee5/Zee Plex platforms; our channel checks indicate that the film is expected to garner almost 2.5-3mn views in the first weekend, however a large portion of this are expected to be through existing Zee5 subscribers; we expect the number of film viewers to breach towards 3-4mn in the next one week, with lower realisations due to a bigger share of traffic from existing subscribers. A film like Radhe if released in cinemas under normal circumstances could garner an opening day collection of INR 35-40cr . Zee5 currently has a MAU/DAU of 65.9mn/5.4mn(as on Q3FY21) respectively; as per the plan, the existing Zee5 subscriber is eligible for one view whereas a new subscriber can pay INR 500 (usual cost of an annual subscription) to subscribe for Zee5 platform annually (plus one view of Radhe film). We believe the actual collection of Radhe cannot be ascertained as only partial number of the viewers actually ended up paying INR 250 for the film. We believe the number of viewers will take a steep hit in coming days due to ease of access of pirated content too on social media

Our estimates suggest Zee had paid INR 225 cr for acquiring all rights of a film like Radhe, out of which 30% was for music, overseas and satellite – and balance was digital/cinema. With cinema being shut, we believe it will be difficult for Radhe to even breach half of the digital/cinema right cost (INR 160cr); however, the only big advantage it has that this will lead to a marginal spike in the number of new Zee5 subscribers (it is believed that the renewal ratio on new subscribers is healthy at ~60-70%). A film like Radhe needs atleast 5mn paid viewers if it were to garner a distributor share of INR 125cr on a base of INR 250cr, which is the average collection of a large budget film in cinemas pre COVID; given the above scenario since many of the subscribers were existing subscribers, the average realisation through the pay mode would not be more than INR 25-30cr (which means a theatrical collection of INR 60-70cr). We believe such models are fair during COVID times when cinemas are not open; however in the medium to long term they may not be able to gain momentum once cinemas come back

We continue to believe that TVOD models are very nascent in a country like India where 1) piracy is a concern 2) consumers pay in theatre for an overall experience 3) Indian consumer is value centric (wants more for less) and prefer aggregators/bundling as a proposition . We don’t expect larger films to adopt this route once cinemas open up clearly due to the poor economics on recovery front; cinema (including overseas) will continue to have a lion’s share in terms of cost recovery (~65-70% of the film’s overall revenue). In terms of overseas too, the performance has been subdued as the number of screens released is less than half of pre covid ; the film is estimated to do a collection of INR 15-20cr which is way too low as compared to Salman’s earlier films which have done an overseas collection of USD 10-13mn i.e.~INR 60-70cr (average of last three films)

In case of the above acquisition, we believe there will be a big boost in the satellite consumption of Radhe whenever it is premiered on TV as Salman Khan films do very well on satellite breaking viewership records; also, the spike in consumption of Radhe for Zee5/Zee Plex could have been lower than actuals going ahead as current circumstances 1) offer no fresh content, with IPL and many large non fiction shows being called off 2) not too much of new content in the form of movies on OTT and 3) cinemas being shut ; if a large film like Radhe isn’t able to meet expectations in terms of recovery, we doubt if small/medium budget films can report any kind of surprise on TVOD. We believe as we move towards Unlock in the near to medium term given the ramp up in vaccination drives, trends on direct OTT releases will reverse as consumers will continue to visit cinemas due to limited outing options. We do expect more films to adopt the direct OTT route in the current situation as unlock for cinemas with 100% occupancy cap allowance may be delayed towards Oct/Nov; however, this will have more of small/medium budget films as most large budget films will wait for cinemas to open up (except for 1-2 large budget film opting the direct OTT route); the above release affirms our view that just as piracy has never been a threat for cinemas, direct release of films (OTT) too will fail to create any impact on cinema. We maintain our view that investing hefty amount in movie content may not augur well as a long term strategy to get a sticky subscriber base for OTT’s and instead broadcaster OTT’s should invest in creating multiple large scale franchise web series like Scam (Sony Liv), which ensures a loyal subscriber base.