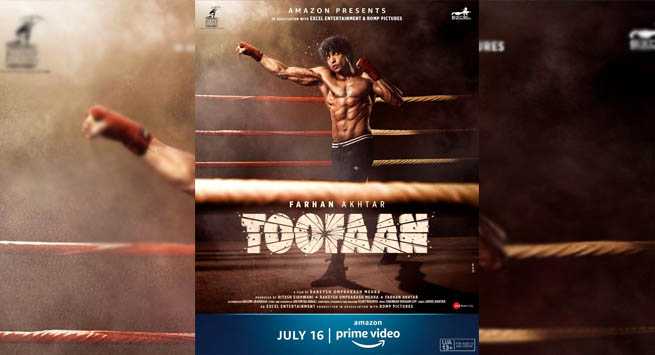 Bollywood actor, Farhan Akhtar announced the new release date of his upcoming sports drama film, ‘Toofaan’. The film which was earlier scheduled to release on May 21, but has been postponed due to the outbreak of the second wave of the coronavirus, will now set to stream on Amazon Prime Video on July 16.

Sharing the news, the actor took to his social media handle to announce the new release date of Toofaan, with the new poster of the film, he wrote, “With humility, love and in dedication to the fighting spirit of the beautiful people of our nation, our film ‘Toofaan’ will be releasing on July 16th. #ToofanOnPrime.”

With humility, love and in dedication to the fighting spirit of the beautiful people of our nation, our film ‘Toofaan’ will be releasing on July 16th. #ToofaanOnPrime

Earlier in May, Farhan had released a statement where he said that he is more focused on helping the community in these times and would postpone his film’s release.

He shares a post where he wrote, “The situation in India is truly heart-breaking, and we at Excel Entertainment and ROMP Pictures send our thoughts and prayers to everyone affected by the pandemic. In light of the severity of the situation, our focus is completely on the pandemic and on supporting our employees, their families, and helping the wider community. Therefore, we have decided to postpone the release of our film ‘Toofaan’ until the situation gets improves. We will issue an update regarding the new release date in due course of time.” Toofaan marks the second collaboration between Farhan and Rakeysh. They earlier worked together in the 2013 film Bhaag Milkha Bhaag.