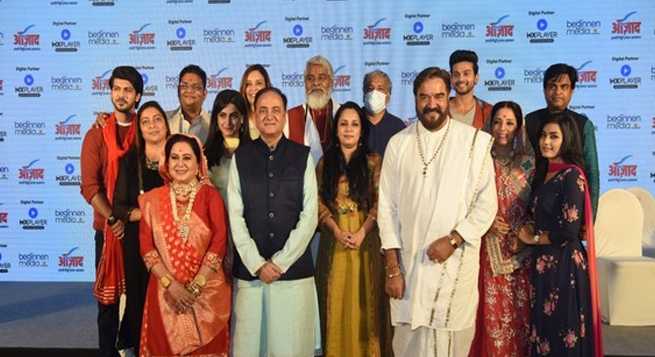 As per the company’s press release, the premium Hindi rural entertainment channel will be launching two new shows titled Meri Doli Mere Angana and Pavitraa Bharose Ka Safar, both of which have been created after deeply understanding the rural person through years of periodic syndicated.

Staying true to the brand proposition of Hamari Mitti Hamara Aasman, themes have been specially created to attract, engage, and connect with this super mass. Starting from September 14, Meri Doli Mere Angana will air at 9:00 pm and Pavitraa Bhasrose Ka Safar at 9:30 pm on Azaad as well as on MX Player.

Produced by Jitendra Gupta and Mahesh Tagde from Tell-A-Tale Media, Meri Doli Mere Angana portrays the beauty and complexities of relationships in the Bithoor-based Singh family, especially the loving bond between Janki and her father. The show captures Janki’s journey from being an innocent daughter to becoming an experienced daughter-in-law who learns to manage complex situations and relationships in a society that differentiates between the two roles. Astha Abhay plays the lead protagonist Janki, Surendra Pal, Rudrakshi Gupta, and Ankit Raizada will be seen in key roles.

Pavitraa Bharose Ka Safar is a family drama set in Meerut. While it is based on the themes of encouraging women empowerment and battling societal issues, the show also depicts the passionate love story of two diverse personalities. Produced by Santosh Singh, Rochelle Singh, and Pearl Grey from Parth Production, Pavitraa Bharose Ka Safar is the story of Pavitraa, the daughter of an underprivileged taxi driver who aspires to complete her education and become self-reliant. She fights against all odds to become a successful entrepreneur who strived to make other women capable of taking care of their families and themselves in all respects. The role of Pavitraa is played by Shaily Priya. The cast also includes Neelu Vaghela, Kumaar Raajput, and Sheezan Mohammed.

Commenting on the Originals launch, Beginnen Media Pvt Ltd (BMPL) managing director, Bharat Kumar Ranga, said, “It’s an industry-first with Azaad making the shift from a creative to a consumer-focused business model. Gaining the trust of our viewers is at the heart of our model as our customer experience is based on deep insights. Our originals have a rural customer-centric proposition which places the viewer, rather than the creatives at its core.”

Welcoming the viewers who had joined the launch event live from different villages in North India, he added, “By its sheer size, the rural super mass is emerging as a segment with huge untapped opportunities. Azaad’s philosophy of ‘People Centricity’ reflects the rural DNA that is the Unapologetically Real Indian (U-R-I). We are delighted to present the ‘UnionShip’ with our content creators, Jitendra Gupta, Mahesh Tagde, Santosh Singh, Rochelle Singh, and Pearly Grey who have created our first two originals. The shows are relatable and would inspire the U-R-I mindset to reconcile with rural traditions and values while ushering in a sense of dynamism and growth to meet their aspirations.”

“Azaad is a first on many levels. There has always been a clear-cut divide between urban and rural India, where rural despite being a majority, unfortunately, has always got a hand-me-down treatment in every sphere of life. And that’s what we want to change with our ‘rural first’ approach,” commented Beginnen Media, general manager – product, Doris Dey.

“At Azaad we truly believe in democratizing the entertainment industry by creating content for much-ignored Rural India, as well as creating an ecosystem where equal opportunities are provided to existing and new makers. We are a ‘challenger board’ determined to create a unique parallel ecosystem within the industry. I am sure that we will set new benchmarks with the unwavering support and participation of all our stakeholders.”

Azaad’s brand proposition, Hamari Mitti Hamara Aasman, was developed in partnership with Scarecrow M&C Saatchi Ltd. The idea was arrived at through an extensive consumer study of the rural person by Future Brands. The unique proposition spells out rural dreams and aspirations and wears the rural pride.

Both the brand film and the brand anthem are devised and created by Azaad’s internal on-air promotions team. The brand film takes a closer look at the U-R-I’s mindset to reveal the pride they take in their roots, culture, and belief systems. Music director Santosh Nair and singer, Divya Kumar rendered the brand anthem.