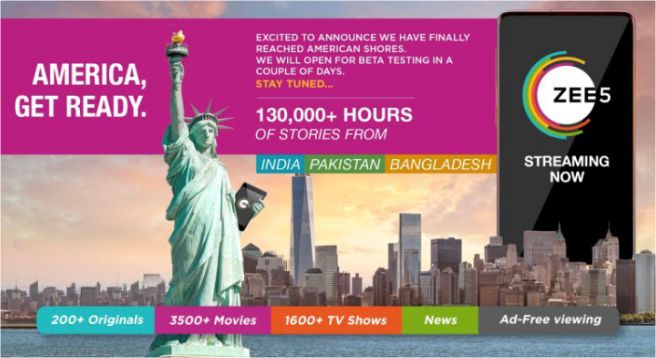 India’s home grown streamer ZEE5, also part of Zee Entertainment, has arrived in the United States after having established itself in South Asia and certain other geographical markets, according to a top company executive.

“So so excited to share that ZEE5 has finally reached the shores of  (the) USA. Our last bastion in our Global conquests,” Archana Anand, Chief Business Officer, Zee5 Global, said in a LinkedIn post yesterday.

Having acknowledged a barrage of congratulatory messages on her post, she added: “We are live in beta and have some really exciting launch plans that I will unveil soon…stay tuned and let the party begin!”

Well, the party has been in the offing for some time now as ZEE5 first established its position in India — though it trails Disney+Hotstar in terms of  combined subscribers — and then has been slowly, but surely stitching up global deals.

Having launched in Bangladesh some time back, ZEE5 recently unveiled its first original show made in the country that India helped gain independence from Pakistan’s domination.

ZEE5 revenues in Q4 ’21 stood at Rs. 1,075 million and the company also took a conscious decision to reduce its annual subscription to Rs. 499 with a view to encourage adoption of yearly subscription packs.

After announcing Tarun Katial’s departure from the company as CEO in November 2020 (content head Aparna Archekar too quit earlier this year), ZEE5 also underwent a restructuring like Zee Entertainment did some time back.

Instead of an overall CEO, it now has various vertical heads like Archana Anand, global business head; Manish Kalra, AVOD head and GB Singh (based in Bengaluru) reporting into Amit Goenka who, as President, Digital Businesses and Platforms, leads the team.