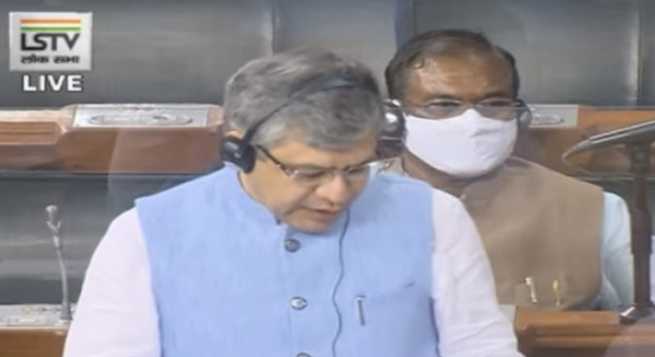 India’s IT and Communications Minister Ashwini Vaishnaw on Monday dismissed media reports on the use of Pegasus software to snoop on Indians, saying the allegations leveled just ahead of the monsoon session of Parliament are aimed at maligning Indian democracy.

In a suo motu statement in Lok Sabha (Lower House), Vaishnaw, who took over the IT portfolio only about a week back, said that with several checks and balances being in place, “any sort of illegal surveillance” by unauthorised persons is not possible in India.

Incidentally, Vaishnaw’s name, along with a former Cabinet minister, too figures in the Pegasus investigation list, according to media reports.

The statement assumes significance in the backdrop of opposition parties creating a ruckus over the issue in both the Houses of Parliament on the first day of the Monsoon session, PTI reported from New Delhi.

The minister made this statement in response to media reports that spyware Pegasus was being used to conduct surveillance on several Indians, including political leaders, government officials and journalists.

“A highly sensational story was published by a web portal yesterday night…. The press report appeared a day before the Monsoon sessionof the Parliament. This cannot be a coincidence.

“In the past, similar claims were made regarding the use of Pegasus on WhatsApp. Those reports have no factual basis and were categorically denied by all parties…. The press report of July 18, 2021 also appeared to be an attempt to malign the Indian democracy and a well-established institution,” the minister said.

More than 300 verified mobile phone numbers, including of two serving ministers, over 40 journalists, three opposition leaders and one sitting judge besides scores of business persons and activists in India could have been targeted for hacking through an Israeli spyware sold only to government agencies, an international media consortium reported on Sunday.

The Indian government, however, had dismissed allegations of any kind of surveillance on its part on specific people, saying it “has no concrete basis or truth associated with it whatsoever”.

Global Snooping Alleged: Meanwhile Reuters reported from Washington that an Israeli company’s spyware was used in attempted and successful hacks of 37 smartphones belonging to journalists, government officials and human rights activists around the world, according to an investigation by 17 media organizations published on Sunday.

One of the organizations, The Washington Post, said the Pegasus spyware licensed by Israel-based NSO Group also was used to target phones belonging to two women close to Jamal Khashoggi, a Post columnist murdered at a Saudi consulate in Turkey in 2018, before and after his death.

The Guardian, another of the media outlets, said the investigation suggested “widespread and continuing abuse” of NSO’s hacking software, described as malware that infects smartphones to enable the extraction of messages, photos and emails; record calls; and secretly activate microphones.

The investigation, which Reuters did not independently confirm, did not reveal who attempted the hacks or why.

NSO said its product is intended only for use by government intelligence and law enforcement agencies to fight terrorism and crime.

The company issued a statementon its website denying the reporting by the 17 media partners led by the Paris-based journalism nonprofit Forbidden Stories.

“The report by Forbidden Stories is full of wrong assumptions and uncorroborated theories that raise serious doubts about the reliability and interests of the sources. It seems like the ‘unidentified sources’ have supplied information that has no factual basis and are far from reality,” the company said in the statement.

“After checking their claims, we firmly deny the false allegations made in their report,” the statement said.

The Guardian said the phone numbers of more than 180 journalists were listed in the data, including reporters, editors and executives at the Financial Times, CNN, New York Times, the Economist, Associated Press and Reuters.