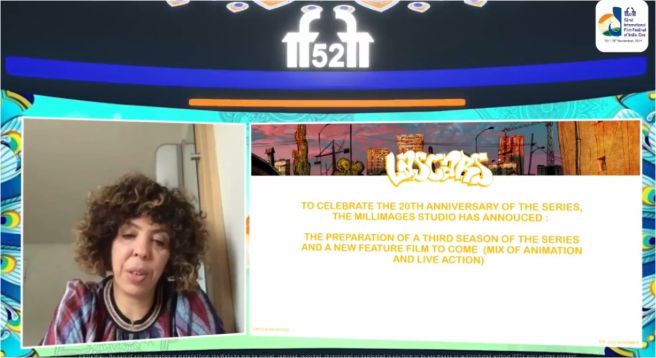 As part of a first-of-its-kind collaboration between the International Film Festival of India (IFFI) and OTT platforms, cine enthusiasts attending the 52nd edition of the fest got an opportunity to attend a virtual master-class on the topic “Why short films are valued by producers?”

Moussi gave her perspective on the role of a producer and what it entails. “A producer has to carry the artist’s dreams along until they become a reality. As a producer, I am always trying to develop the most innovative projects and making sure they stay connected with the air of time,” she said.

The veteran producer told aspiring members of the film fraternity that a producer should also have his or her vision on the horizon, anticipating trends, armed with a strong artistic sense.

“It is also the producer’s job to anticipate trends and use her artistic judgement to evaluate the relevance of a project, sometimes flowing from even a simple idea,” she added.

So, why should one produce short films? It leads one to discover new talents and let producers express themselves, explained Moussi: “It is about finding new ways of telling stories. To open new sources of inspiration and to explore other cultures also, producers are nowadays foraying into short films.”

Another advantage of producing short films is that it lowers financial risks and gives freedom to directors, pointed out Moussi.

“Nowadays, more and more short films are getting selected for various film festivals, and producers have started to back short films mainly for two reasons – one is smaller budgets and second, the ability to work on fresh ideas,” she said.

Citing the example of animation series ‘Lascars’, Moussi said that this series’ success story has inspired many young filmmakers.  “The stories are taken from the youth of working-class neighborhood; themes of friendships, desires, frustrations and dreams are central to these creations,” she pointed out.

Moussi began her career as a journalist and then became a press photographer. Head of the visual arts studio Millimages, she has created her own production structure with the objective of experimenting with new formats and making animation videos and video games.

Created more than 50 years ago, Gobelins – School L’image has become a reference point among visual arts schools. It stands out in the creative industry landscape, thanks to its original positioning: a school that prepares for all visual creation professions, from the conception to the production of images in all their forms (still, animated, interactive, 3D), from printing 4.0 to virtual reality.