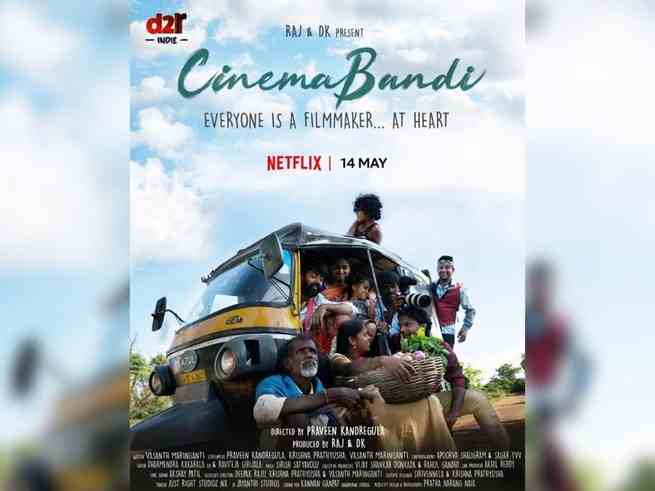 Directed by Praveen Kandregula, the Telugu movie tells the story of an auto-rickshaw the driver turned filmmaker and operates on the basic idea that ‘everyone is a filmmaker at heart. It’s set in a small village in a border town between Karnataka and Andhra Pradesh. The villagers find a camera that someone left behind in an auto, and set out to make a film.

In an enchanting display of innocence coupled with the zeal to learn something new, a ‘film crew’ forms and the shooting begins. In one scene, a man explains to the other that the foam cover for the shotgun mic mounted on the camera is a place to wipe the sweat off their palms while shooting.

In a hilarious turn of events, the crew is faced with a gigantic task- finding their heroine- and to that goal, they offer the role to almost every woman they see.

It also shows that the original owners of the camera are looking for it, determined to go back with the camera no matter what. On the other hand, the amateur crew continues to work together on the film they believe will save their drought-stricken village.

Sharing the trailer on social media, Raj & DK tweeted, “Made by first-time director, Praveen Kandregula, his writing partner Vasanth Maringanti, and shot by a small group of friends, Cinema Bandi is quintessential, grassroots filmmaking. A true indie Kudos to the entire team for pulling this off!”

Made by first-time director, Praveen Kandregula, his writing partner Vasanth Maringanti, and shot by a small group of friends, Cinema Bandi is quintessential, grassroots filmmaking. A true indie 🙂 Kudos to the entire team for pulling this off!#CinemaBandi #CinemaBandiOnNetflix

The tagline of the movie reads, “Everyone is a filmmaker at heart.” On YouTube, the film is described, “There’s more story behind the scenes than what meets the eye on-screen.”

Cinema Bandi will start streaming on Netflix on May 14.