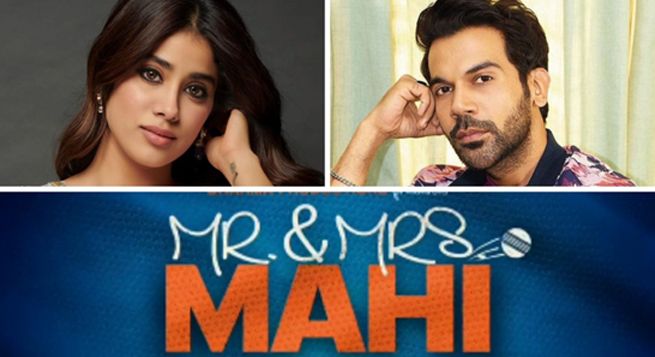 Bollywood actors Janhvi Kapoor and Rajkummar Rao are all set to share screen space once again in ‘Mr and Mrs Mahi’ from Dharma productions, the studio announced on Monday.

Sharing the film’s first look poster, a post on Dharma’s official Twitter handle read, “It takes a partnership of the hearts to achieve a dream! Presenting #MrAndMrsMahi, a match made for the winning streak! Coming to cinemas near you on 7th October, 2022.”

Rajkummar also shared the news on his Instagram handle and wrote, “Sometimes you can’t chase your dreams, alone! Excited for this partnership on the field with Janhvi Kapoor, directed by Sharan Sharma.”

Janhvi too wrote on Instagram, “Time to pad up – it’s going to be a journey of two hearts chasing a dream!”

For the unversed, Rajkummar and Janhvi have previously worked together in the Hindi horror-comedy, ‘Roohi’, ANI reported from Mumbai.

‘Mr and Mrs Mahi’ will be directed and co-written by Gunjan Saxena The Kargil Girl fame Sharan Sharma along with Nikhil Mehrotra and produced by Karan Johar under the banner of Dharma Productions.

Currently, the upcoming movie is slated to release on October 7, 2022.