Cyberspace can’t be a place where criminality finds refuge: junior IT Minister
SUBSCRIBE 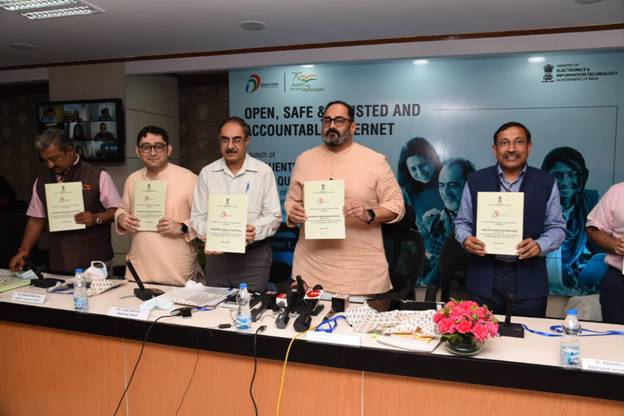 India’s Minister of State for Electronics and IT Rajeev Chandrasekhar Monday asserted that the Internet must remain open, safe and trusted for users, but argued that cyberspace cannot be a place where criminality finds refuge.

“For all the good things that the Internet represents…it also represents significant growth in user harm,” Chandrasekhar said, adding though the government would prefer averting litigations (relating to regulations), “cyber space cannot become a place where criminality finds refuge”.

The junior IT Minister was speaking after releasing in New Delhi a set of frequently asked questions (FAQs) around the intermediary guidelines to enable better understanding of goals and provisions of the new rules among Internet and social media users.

Pointing out that regulations would “keep evolving” to keep users of the Internet away from harm, Chandrasekhar, himself a tech entrepreneur-turned-politician, added that the Indian government would continue to “engage with stakeholders” as there must be some rule-based accountability of the Big Tech.

Asked by an online participant — the event was aired by the Ministry of Electronics and IT (Meity) on YouTube too — to comment on opposition political parties’ allegations that the government wanted to control the Internet and content riding on it, the Minister dismissed it by saying, “I can’t deal with delusions.”

In an indirect olive branch to the whole Internet eco-system, Chandrasekhar was at pains to explain that he’s averse to litigations between corporate houses and the government, and would much prefer contentious issues were resolved through discussions. “We want the industry to grow (in India),” he added.

Clarifying that the FAQs released on Monday should not be treated as SOPs (standard operating procedures), the Minister said the government would come out with SOPs relating to intermediaries.

The rules require social media platforms to remove any content flagged by authorities within 36 hours and set up a robust complaint redressal mechanism with an officer being based in the country.

Social media companies are required to take down posts depicting nudity or morphed photos within 24 hours of receiving a complaint.

Significant social media companies — those with over 50,00000 users — also have to publish a monthly compliance report disclosing details of complaints received and action taken as also details of contents removed proactively.

According to a government statement, the FAQs, consisting of 28 questions, attempt to respond to general queries on the IT Rules in a simple and easily understandable manner for a common user and also for intermediaries – but for only that section that is administered by Meity as another part of the digital regulations is administered by Ministry of Information and Broadcasting.

The FAQ consists of various sections as following:

o Section II: Basic Terminology and Scope of the Rules.

o Section III: Due Diligence by an Intermediary.