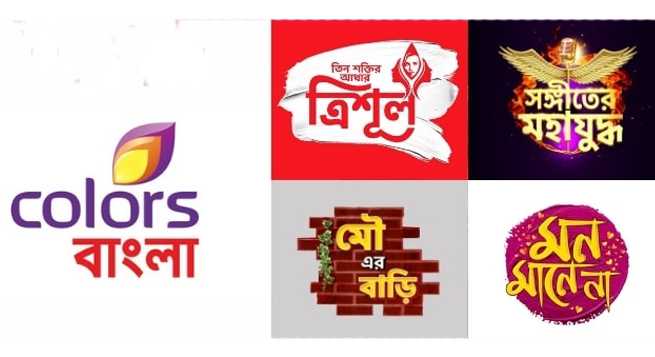 The family entertainment channel, ‘Colors Bangla’ has just announced an impressive line-up of 5 new shows including one musical reality show and four fictional dramas all of which will premier in August and September.

As per the company’s press release, the channel has roped in the best from the Bengali entertainment industry including prominent producers like Nishpal Singh Rane (Surinder Films) who has innumerable superhit movies and Prime Time TV shows, Snehasihs Chakraborty (Blue Production) who has countless superhit TV shows and Shashi Sumeet who has more than 40 shows nationwide.

The Colors Bangla entertainment extravaganza will bring acting stalwarts like Papia Adhikari, Debolina Dutta, Anjana Basu, Sudipa Basu back to the small screen with these shows. Doyens of popular Bengali music like Jeet Ganguly and Anupam Roy are doing the title tracks for the shows. COLORS Bangla is all geared up to enchant its audiences with never before entertainment.

MOU ER BARI: The story is about the life and struggles of a woman who marries a new family but gets her parents to live under the same roof. Her husband is her support in her endeavors and helps her to achieve everything that she ever wants. Mou played by popular actress Adrija Roy is a vivacious girl who is modern but deeply rooted in her ideals. Roopam played by Abhishek – A talented actor from North Bengal is a good-looking, flamboyant, lazy, happy-go-lucky guy. The show has been produced by Surinder Films. The show will go on air from 30th August every day at 6.30 pm.

TEEN SHAKTIR AADHAR – TRISHUL: is the story of three sisters, Tara, Durga & Kali hailing from a poor, village-based weaving family. Affluent and powerful, Rajnandini is a fashion tycoon renowned worldwide. Circumstances bring the three sisters and Rajnandini face to face, and the sisters seek to avenge the humiliation meted out to them by Rajnandini. Debolina Dutta plays the role of Rajnandini along with a powerful star cast like Tumpa Ghosh, Sudipta Chakraborty. The show has been produced by Snehasish Chakraborty. The show will go on air from 30th August every day at 7.00 pm.

MON MANE NA: Mon Mane Na is a classic rugged love story between two diametrically opposite characters. This is the story of the love and hates relationship of Rudra, an uneducated and rowdy villager, and Gauri, an educated woman who values principles above anything else. Played by Pallabi Dey, Gauri is a woman of principles and does not tolerate anything wrong. Rudra: A Bodybuilder and wrestler. The muscleman of the local political leader. A rowdy – rustic – short-tempered man. Despite everything, Rudra has a heart of gold played by Sam. The show will be produced by Surinder Films. Anjana Basu plays the role of the antagonist as Boroma and the title song has been done by none other than Jeet Ganguly. The show will go on air from 30th August every day at 7.30 pm.

DUTTA AND BOUMA: An unusual love story where the role of daughter-in-law takes precedence over that of a wife. Can daughter-in-law take charge of the family business? The story is set on a Traditional Jewelry business family. Papiya Adhikari plays one of the most important roles. The story will be produced by Shashi Sumeet production. The show will go on air from 30th August every day at 8.00 pm.

SANGEET ER MOHAJUDDHO: An epic saga of a musical battle to be hosted by none other than popular actor, anchor Mir. The show produced by Raj Chakroborty, will have the best of talent- come together on one platform and fight for the crown. The show will be judged by the best names from the industry including Ustad Rashid Khan, Lopamudra Mitra, Jeet Gannguli, and Abhijeet Bhattacharya. The show will go on air from 4th September every Saturday and Sunday at 8.30 pm.

The launch of the new shows will be supported by 360-degree marketing and communication campaign encompassing TV, cable, on-ground, radio, outdoor as well as digital platforms. The channel is also planning for a fresh identity on the day of the launch.

With COLORS Bangla, all set to launch its new content lineup, all ardent fans can keep themselves entertained from the comforts of their homes.

Speaking on the launch Sagnik Ghosh, Business Head, COLORS Bangla said, “We at COLORS Bangla have always endeavored to bring to our viewer’s quality and entertaining content and now we are all set for the launch of the first tranche of our content lineup. Through our characters & stories, we want to alleviate the anxiety & adversities that the Bengali society and our core viewers are facing today. Our shows will encourage people to dream and aspire and provide our existing as well as new viewers with superior quality content and an enhanced viewing experience. “