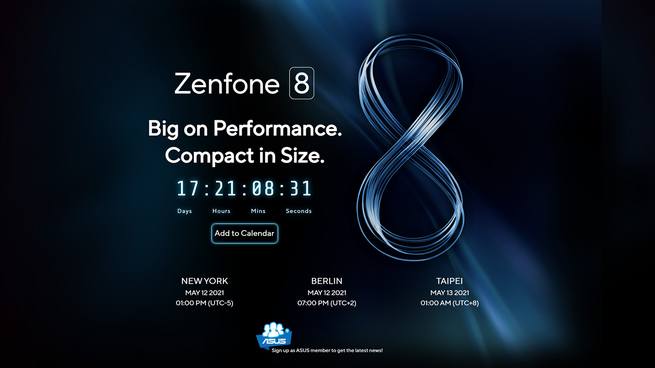 The Taiwanese multinational computer and phone hardware and electronics company Asus has finally announced that the much-awaited ZenFone 8 will be unveiled on May 12th.

The company launched the Zenfone 7 and Zenfone 7 Pro back in September and is already set to follow the duo up with the next generation of premium phones in the series.

The company website now has a landing page with a countdown to the launch date. Although the microsite suggests that only one variant will be released, sources say that the company could release up to three ZenFone 8 series smartphones.

Through its official page, Asus Zenfone 8 will be launched on 13th May at 01:00 A.M. Taipei or 12th May at 10:30 P.M. IST. Given that the pandemic is still raging on, the event will be held virtually.

However, the official website of Asus does not reveal the smartphone models in the Zenfone 8 Series and the company has not specified the specifications that the Zenfone 8 will carry, however, they confirmed that the phone will have a larger display and compact size, which suggests that there might be an ASUS Zenfone 8 mini.

The Asus ZenFone 8 will be powered by the Snapdragon 888 SoC. According to rumors, the phone will feature a 5.9-inch FHD+ display with a resolution of 1080 x 2400 pixels with a 120Hz refresh rate, and no notch or bezels. In the single-core test, it received 1124, and 3669 for multi-core. These scores are not very different from the phones of other Snapdragon 888 phones.

The Zenfone 8 Pro may have up to 16GB of RAM that would suit high-end gamers and streamers. There is no information on the device’s battery yet. However, the smartphone is likely to be equipped with 30W fast charging.