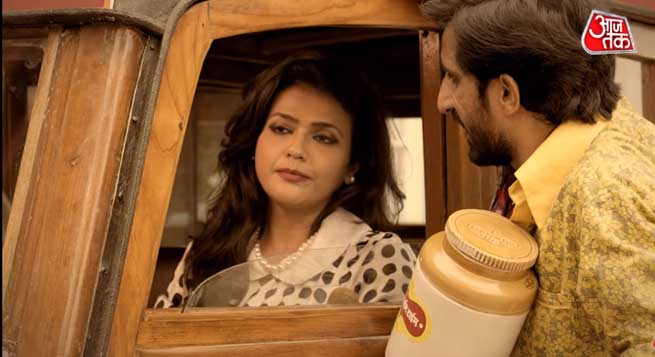 News (samachar) is best served as it is; not spiced up like a pickle (achaar).

As part of the on-going #AajTakSabseTez (Aaj Tak the channel that bring news the fastest) campaign, Hindi news channel Aaj Tak, part of the Indian Today group of media assets, has launched the second film in the new series of ad campaigns.

The film titled ‘Achaar Gully’ highlights how Aaj Tak does not conform to the growing trend of spicing up news. The metaphorical marketplace shown is a reminder of the state of the news industry in general, the channel claims.

Conceptualised and directed by the widely-acclaimed writer-director Pradeep Sarkar, #AajTakSabseTez campaign is a satirical take on the current news environment in the country and entertainingly highlights the relaxed standards of reporting by some players in the age of fake news. The first film, ‘Sach Ka Band’, brought to light the exaggeration of events while presenting them to the audience.

According to an official statement from Aaj Tak, being the most watched and trusted news channel in India for 20 years, Aaj Tak and its brave journalists have brought a ringside view of every major happening in the country. While many news outlets may have clear leanings, Aaj Tak has always taken the middle ground, without any bias. As the depth of echo chambers increases, the need for a shared platform where both sides can be heard is essential. A place where people can agree to disagree is the need of the hour. Aaj Tak is that listening room, that middle ground for the two sides to continue a meaningful dialogue, the statement added.

What else is a society if not a vibrant conversation in progress? These films, while depicting Aaj Tak’s relentless pursuit to always side with the truth, are equally sure to put a smile on your face. Dont believe us? You can watch the film here: