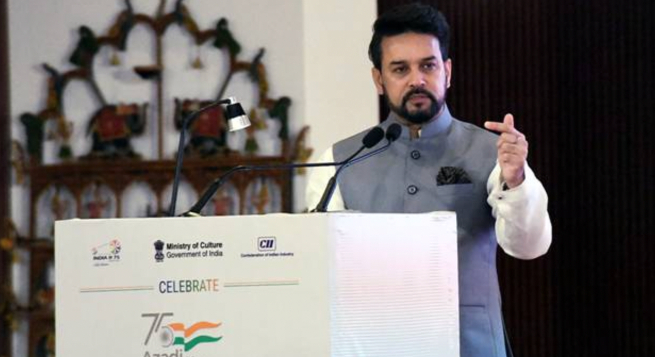 Minister for Information and Broadcasting Anurag Thakur on Wednesday said growth of the Internet through affordable mobile devices has re-ignited the media industry and applauded the role played by Indian media during the trying times of COVID19 pandemic in disseminating vital information.

Addressing the 17th Asia Media Summit via video-conferencing, the Minister said that Indian media ensured that the Covid-19 awareness messages, important government guidelines and free consultations with doctors reach everyone in the country.

He also highlighted the importance of Doordarshan and All India Radio, both of which significantly delivered on their mandate of public service as they set the trend through prompt coverage, ground reports and organizing programmes on public health.

However, the Minister also dwelt on the rampant fake news and misinformation that circulated during the height of the pandemic.

Speaking on the pandemic of misinformation, Thakur said “unverified claims and fake content circulating in media had created an atmosphere of extreme fear amongst the people” and credited the Press Information Bureau, under MIB, for its Fact Check Unit that actively dispelled rumours and clarified on fake news on real-time basis.

Further highlighting the government’s achievements in the fight against COVID19, Thakur said that while vaccinating a 1.3 billion population was hugely challenging, India has vaccinated a majority of its population due to combined efforts of the Government, Covid warriors and civil society.

Crediting the Indian media for sharing this burden and delivering on its role as a responsible disseminator of credible information, the Minister said, “In this endeavour, the Indian media played a very important role in educating the people about the benefit of being vaccinated against Coronavirus. We faced many roadblocks. One of the foremost challenges was vaccine hesitancy. That was broken by media through right messages and education.”

Since the theme of Asia Media Summit this year is “Future Forward, Reimagining Media”, while emphasizing the changing delivery mechanisms of media, Thakur remarked that media today is highly technology-driven and is witnessing a rapid pace of innovation.

Growth of the Internet through affordable mobile devices has re-ignited the media industry, Thakur said, adding 5G technology will further enhance the user experience, with increase in the speed of delivery and improvement in the quality of the media content.

However, Thakur also said that authenticity of content would always remain at the core, whatever be the technological progress. “We can talk about the right to free flow of information, we also need to talk about the need for dissemination of correct information,” he added.