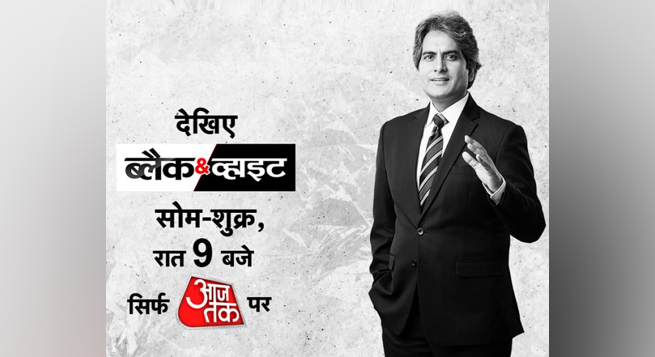 Sudhir Chaudhary’s ‘Black and White’ show, which airs on Aaj Tak at 9:00 p.m., tops the programme telecast rating of the 9 p.m. slot weekday in the 46th week.

This week, ‘Black and White’ saw significant growth, as evidenced by 737 TVT on Monday programme airing. The show focused on the heinous murder of Shradha Walker.

Aside from television, the show has received millions of views on YouTube and has been the top-rated news show on YT live at 9 p.m. since July of this year.

Sudhir is arguably the best news anchor in Hindi at 9 p.m. His coverage of the Morbi Bridge collapse, the attack on Imran Khan, and the Shradha-Aftab case has resulted in record viewership.

Sudhir is well-known for covering some of our country’s and the world’s most pressing issues. He approaches his show in a very rational and explanatory manner. That’s why his Monday newscast is the highest-rated news programme this week at 9 p.m, the channel said in a statement.

He recently covered the Satyendra Jain video leak, the Gujarat elections, and the restrictions imposed on the FIFA World Cup, which is being held in Qatar this year.

On October 3, the campaign was launched during Sudhir Chaudhary’s ‘Black & White’ show. The campaign was a huge success, and many people took part by making a video of themselves talking about their struggles.

Sudhir Chaudhary’s latest video, in which he travels with a cab driver, has received over one million views in just a few days, demonstrating that he has a large fan base among the audience.