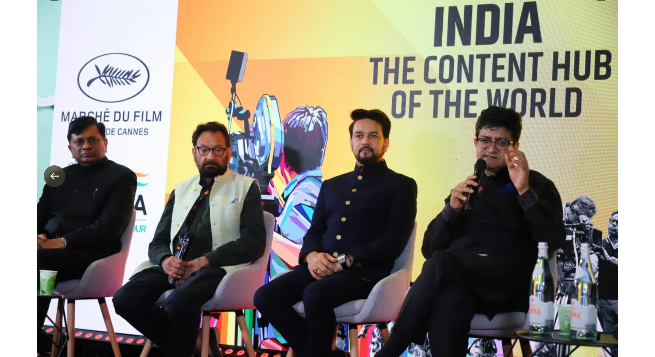 India’s OTT market is set to grow at 21 per cent every year, Minister for Information and Broadcasting Anurag Thakur said on Thursday at Cannes even as he invited foreign producers to shoot films and other projects in the country.

Speaking at the “India Forum” at Palais des Festivals in Cannes, the Minister said an all-round government boost to the Indian media and entertainment sector is aimed at catalysing the whole entertainment ecosystem, which is expected to generate $ 53 billion annually by 2025.

Thakur said the federal government will take all measures to speed up co-production from around the world and also offer the best locations in India for film shoots, including giving financial incentives for local productions with domestic manpower.

“We are poised to take another leap as 300 million citizens are set to connect online as India marches ahead in cementing its space in the media and entertainment sector,” the Minister was quoted as saying in an official press release.

Thakur said Indian startups in the media and entertainment sector will showcase their technological prowess and pitch to the best in the animation, visual effects, gaming and comics (AVGC) industry at Cannes.

“The government of India has officially designated audio-visual services as one of the 12 ‘champion service sectors’ and recently set up an AVGC task force comprising industry leaders to prepare a policy roadmap for India to take a quantum leap in this sector and position us as the preferred post-production hub of the world,” the Minister elaborated.

Pointing out that States such as Uttar Pradesh and Madhya Pradesh have formulated their own film facilitation policies, Thakur painted a bright future for M&E sector in India, saying that on one hand artificial intelligence, virtual reality, immersive technologies such as the Metaverse, present immense possibilities to India’s IT skilled workforce, on the other hand the OTT market in India is predicted to grow at  21 percent annually to nearly $ 2 billion by 2024.

The Minister promised that the federal government will take all necessary measures to transform India into a global content sub-continent and “use the skills of youth to make India the preferred post production hub for AVGC sector”.

Thakur envisioned government initiatives would catapult Bharat (India) into the league of leading quality content producing nations across the globe in the next five years,

During a panel discussion with Indian and foreign panelists at the India Forum, Thakur, while dwelling on the strong content and Indian OTT platforms’ ecosystem, added: “Today Indian platforms outnumber foreign ones (in India).”

Meanwhile, staying close to the Festival de Cannes, Indian pubcaster Doordarshan has made elaborate arrangements for daily coverage of the film festival.

Doordarshan’s international channel DD India is taking viewers on a colourful cinematic journey in terms of understanding a rich diversity of voices from the film world globally as it’s the only TV news channel from India with ground presence at Cannes.