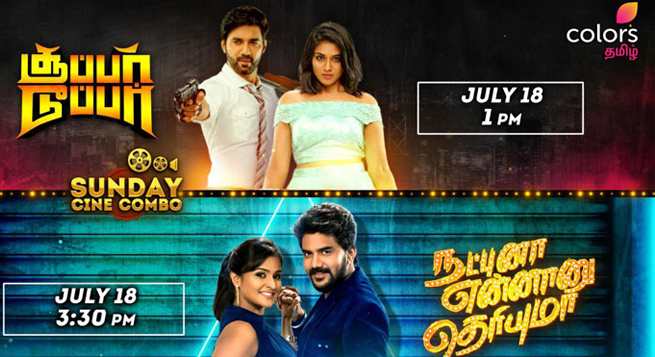 To ease up the mood this weekend with two back-to-back rib-tickling movies, Colors Tamil the youngest GEC of Tamil Nadu, is set to bring to screen the World Television Premieres of ‘Super Duper’ and ‘Natpuna Ennanu Theriyuma’.

Packed with humor, drama, and excitement, the intriguing combination of movies as part of Sunday Cine Combo is sure to keep the audience amazed this Sunday.

According to the company’s press release, Super Duper is a 2019 comic thriller directed by Arun Karthik, the film boasts of a talented star cast featuring Druva, Indhuja, and Sha Ra in the lead. The story revolves around two petty criminals, who end up kidnapping the wrong woman and find themselves in a situation where they have to deal with a kingpin of a drug mafia.

Whereas, Natpuna Ennanu Theriyuma is a 2017 comedy movie directed by Sivakumar, featuring the heart-throb Kavin, Raju Jeyamohan, Arunraja Kamaraj, and Ramya Nambeesan in the lead roles and Azhagam Perumal and Ilavarasu in the supporting roles.

The story trails the life of three best friends whose lives change after two of them fall in love with the same girl. The story becomes intriguing when the trio is all set to start a new business venture and faces never-ending obstacles, their love life being one of them.

Even the viewers can also tune in to VOOT any time to see Colors Tamil shows at their convenience.