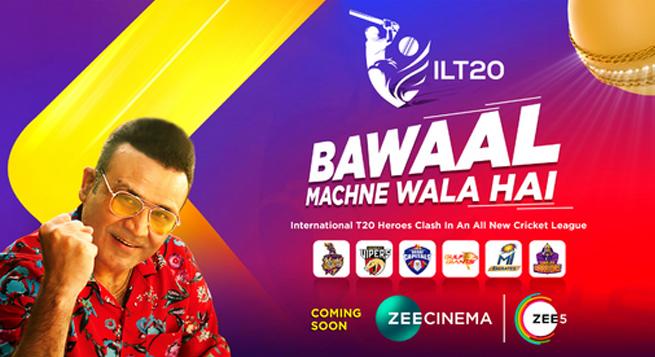 ZEE Entertainment Enterprises (ZEE), one of the leading Indian media conglomerates, has unveiled a new advertising campaign featuring former Indian batter Virender Sehwag to announce the first season of ILT20, which is set to begin in the UAE in January 2023.

In keeping with Sehwag’s persona, the campaign video takes an irreverent approach to build excitement for the ILT20 league.

Sehwag is relaxing by the pool when his secretary, played by actor Brijendra Kala, calls to inform him that Zee Cinema has called about a major project.

The former World Cup winner thinks the request is for a possible film role and starts talking about how he always thought he had a great face for appearing in movies until Kala reveals that the project ZEE has in mind for him is for a new cricket league, which surprises him.

In the 34-match event, six teams will compete for the ILT20 trophy. The competition will air live on ZEE’s ten linear channels in English, Hindi, and Tamil, as well as the company’s OTT platform, ZEE5. In India and around the world, the tournament will be broadcast on Zee Cinema (SD & HD), ZEE Anmol Cinema, ZEE Thirai, ZEE Bangla Cinema, ZEE Zest (SD & HD), & Pictures HD and &Flix (SD & HD).

“We are thrilled at the opportunity to engage sports fans with the return of cricket on ZEE,” Kartik Mahadev, Chief Marketing Officer – Content SBU, ZEE, said. We intend to use the ZEE movie platforms in multiple languages to provide a more immersive experience for T20 cricket fans. Our brands understand the passion that drives movie fans, and it’s exciting to see these two worlds of movies and cricket fans colliding on the Zee movie channels.