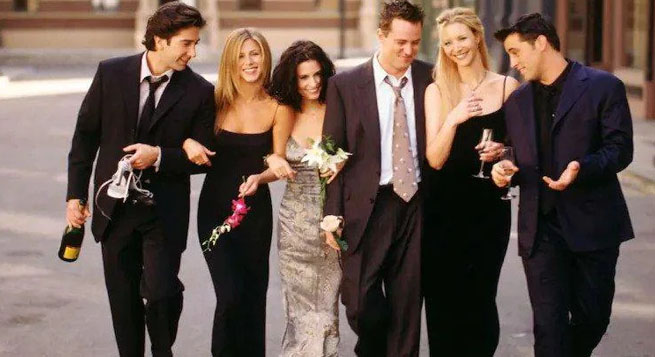 Well, all those who were speculating as to where the much anticipated ‘Friends: The Reunion’ could be viewed in India, the suspense is now over.

While globally the one-hour special would be released on HBO Max (not available in India), owned by AT&T’s WarnerMedia, on May 27, 2021, in India the Friends have preferred ZEE5, contrary to expectations that it will drop on Disney+Hotstar, which airs several HBO shows.

The friends’ reunion saga in recent times will be ZEE5’s second mega offering after Bollywood-star-producer Salman Khan’s new flick ‘Radhe: Your Favourite Bhai’ decided to go in for a digital premier in India, in association with ZEE5 and a host of DTH platforms, as a TVoD or transactional video on demand on the occasion of Eid.

“We are extremely excited to bring ‘Friends: The Reunion’exclusively on Zee5 for the Indian market. ‘Friends’ is amongst the world’s most-watched and loved sitcoms and it is a great opportunity for us to present their reunion, something that the world has been talking about, on ZEE5 for ‘Friends’ fans in India,” said Manish Kalra, Chief Business Officer, ZEE5 India, in a statement.

Now, don’t start rubbing your hands in glee all you fans of ‘Friends’, the series that even with old episodes has seldom dropped out of the weekly Top 10 trending shows of India on Netflix over the last 14 months since Covid-related lockdown started in March 2020.

Whether Indians will get to view the ‘Reunion’ episode on May 27 itself along with the rest of the world is still undecided, considering the time difference between the US and India, according to sources in ZEE5 who said the streamer is working on those details.

The sources also revealed that in all probability, the show would be free viewing for premium subscribers of the streamer, though for other categories of subscribers some scheme is in the works and the details could be announced today or over the next few days.

However, ZEE5 is silent on the money that it spent on snagging the India rights of ‘Friend Reunion’, which, according to industry sources, would not be a small amount.

HBO Max had also released a teaser trailer some time back (https://youtu.be/MedRN92V6lE) for the special that showed the core cast walking in a distance with their back towards the camera. An acoustic version of the show’s signature theme plays in the background.

‘Friends: The Reunion’ will debut on the one-year anniversary of the launch of HBO Max and exactly one year after it was originally supposed to air, the streamer said in a statement.

Described as a “real-life unscripted celebration of the beloved show”, the unscripted special will see Aniston, Cox, Kudrow, LeBlanc, Perry and Schwimmer return to the iconic comedy’s original soundstage, Stage 24, on the Warner Bros Studio lot in Burbank.

ZEE5 revenues in Q4 ’21 stood at Rs. 1,075 million and the company also took a conscious decision to reduce its annual subscription to Rs. 499 with a view to encourage adoption of yearly subscription packs.