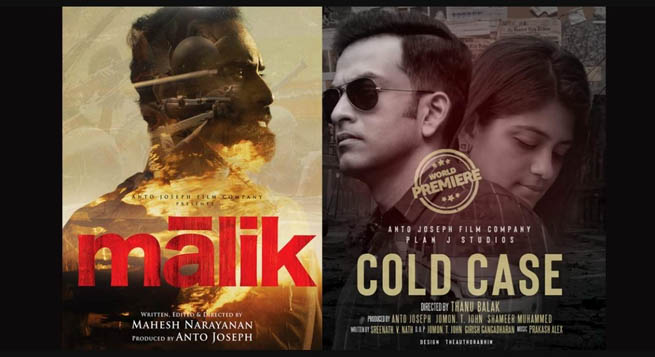 Anto Joseph, the producer of Fahadh Faasil’s upcoming film ‘Malik’ and Prithviraj Sukumaran’s film ‘Cold Case’, has said they might skip the theatrical release and go for digital release as some big ticket Hindi films have done in recent times, including Salman Khan’s ‘Radhe’.

According to a Tweet shared by LetsOTT Global, both films are likely be premiered on Amazon Prime Video though nothing has been confirmed officially by the makers yet.

While, the trailers of both the films were released earlier in March, but due to the rising case of COVID19 they could not be released in theatres.

Fahadh Faasil’s ‘Malik’ is an action-thriller film. The story follows a bunch of real-life political events highlighting the struggles of the minority communities.

Whereas, Prithviraj Sukumaran’s ‘Cold Case’ is a political cop thriller.

Our sources say he is negotiating with Amazon Prime. pic.twitter.com/G8YW5wSExL