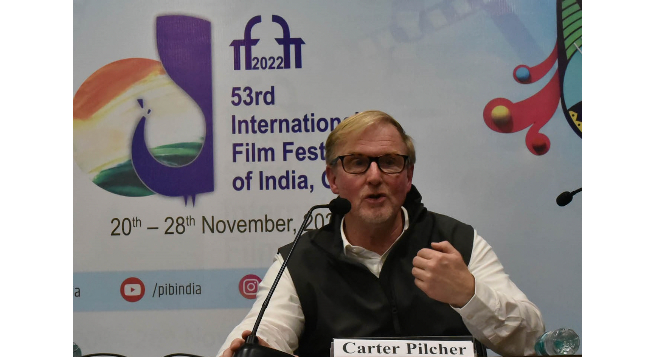 All the five short films, which were made by the ‘75 Creative Minds of Tomorrow’ under the 53-hour challenge programme announced by the government, will be telecast on Shorts TV on November 27, according to the chief of the broadcasting company.

Commending the creative minds, Shorts TV CEO Carter Pilcher said: “What happened in the past five days is ground-breaking for the entire film industry in India. The names were announced for 75 Creative Minds on November 4th, and in the last 20 days they have brainstormed, connected on Zoom, and shot an entire film.”

Pilcher on Thursday told the audience at the ongoing 53rd International Film Festival of India (IFFI) how the five teams interpreted the challenge of looking at India in 2047 differently.

“One was about futuristic technology and how it disenfranchises relationships and the importance of relationships, another one was about New India and about a woman whose husband’s family wants her to wear a nose ring at their engagement, and has an interesting and hopeful statement. The third film is where all parents are single parents, and the child discovers that it might be possible to have either a mom or a dad. Another film is a beautiful film about a world where paper currency has disappeared,” he explained.

The 53-Hour Challenge, launched as part of “75 Creative Minds of Tomorrow” programme at IFFI-53 in Goa, announced its winner Thursday. The 75 Creative Minds, selected from over 1,000 applicants, were divided into five teams of 15 each. Every team produced a short film on its idea of India@100 in just 53 hours. This segment of IFFI-53 was powered by the National Film Development Corporation in collaboration with Shorts TV, according to an official statement from the government.

Pointing out that the films have come out amazingly well, Pilcher said, “Every single one of them had something in it that was absolutely amazing. Many of the directors are from parts of the country which do not get to be highlighted.”

According to Shorts TV chief, he was terrified before watching the films. “It is very scary for me to have my name on five films and not know what was happening. They could all be terrible.”

Yet, today morning, when they saw the film, the jury was blown away when they saw five amazing films, as every one of them had something unique in each of them.

Speaking about ‘Dear Diary’, the winning film, Pilcher said that it is the story of a girl who was abused 20 years ago and, in 2047, her sister comes home and goes to the same place to realize that India has become a better place for women.

“The beauty of the film is that it can tell very deep truths and reach them into their minds and provoke thoughts, and bring us together (rather) than send us away,” Pilcher said.

He spoke about the challenges faced by the participants in the last 53 hours that included sleepless nights, shooting in limited daylight, developing a comfortable working relationship with each other, and a budget of $ 1,000 each.

Pilcher credited the Minister for Information and Broadcasting Anurag Singh Thakur for the idea of the 53-Hour Challenge. “It was entirely his brainwave, and it turned out to be an amazing idea with the way things have turned out in this challenge,” he added.